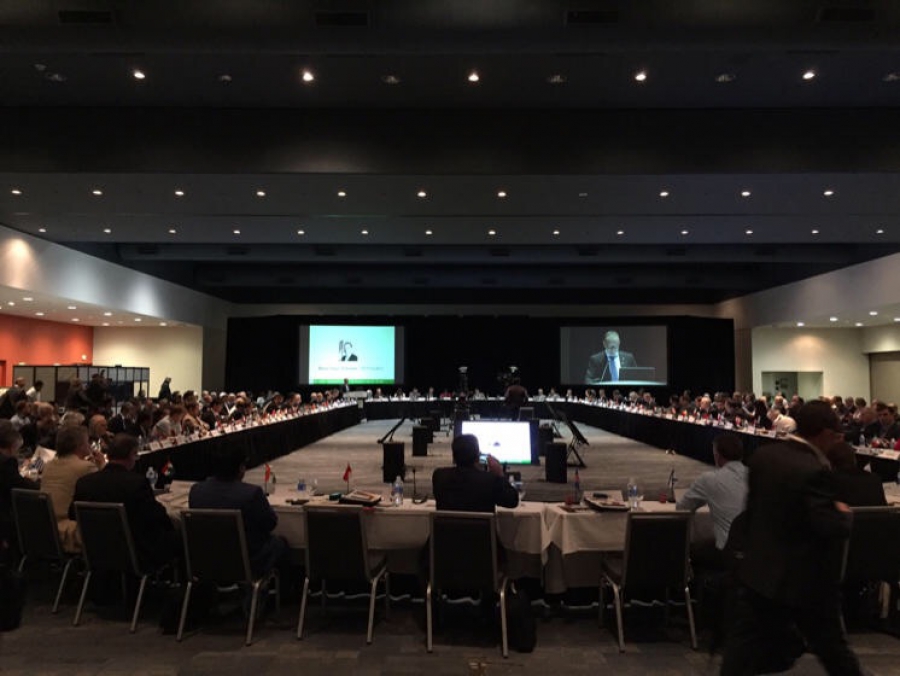 Successful week in San Francisco for the World Tunnel Congress 2016

From April 22nd to 28th in San Francisco, United States, the International Tunnelling and Underground Space Association held its 42nd General Assembly along with the 2016 World Tunnel Congress (WTC), co-organised with the Underground Construction Association of SME. As states demonstrate strong needs in tunnels and underground spaces for public transports, interchange subway stations, hydroelectric infrastructures, etc, the WTC 2016 was a unique occasion to discover the latest state-of-the art innovations in urban planning and underground construction projects in the United States and worldwide. This international event, widely recognised among tunnelling professionals, civil engineers, and public authorities, is, indeed, the top attended annual “rendez-vous” that currently permits to have a clear vision of the latest projects of underground infrastructures over the planet.

This year, 2 319 participants gathered around several strategic questions raised by countries: how are cities coping with climate change pressures, a few months after the COP21 negotiations in Paris? How could they improve their networks of mobility and, at the same time, develop green and pedestrian areas above ground? What will the urban planning of the future be? What is the future of material freight? In what way can high technologies in tunnels and underground spaces contribute to the development of smart cities? Convinced that the tunnelling industry have ingenious responses to address these challenges, the ITA, along with the UCA of SME, offered the attendees a large panel of several high profile conferences, up to 200 technical sessions, and oral and poster presentations to address these questions and thus favour good practice and innovation sharing.

In this regard, one can evocate the ITA Tech Session dedicated to the very recent exploitation of the Internet of Things (IoT) by the tunnelling industry. At that occasion, a representative of SIGMA Connectivity, a subsidiary of one of the IoT leading consulting group, SIGMA, offered an interesting perspective of the future IoT developments, pointing out that two strategic shifts would greatly influence the whole industry market, and notably the tunnelling industry: the connexion of digital technologies with industrial products and logistics, from the one hand, and, above all, the development of easy-to-use IoT enablers, that will permit to drive higher volumes of data and to considerably reduce the costs of this revolutionary technology. Pauli Arenram, Chairman of the Tech Committee in charge of promoting new technologies within the International Tunnelling Association (ITA), expressed his satisfaction regarding the value of the exchanges for civil engineers working in the tunnelling industry: “New digital technologies have definitely reached the tunnelling industry. There is a growing need for safer and more reliable systems that communicate, deal with and report large data in actionable format to the stakeholders from the investigation phase of tunnelling projects, during the construction and the tunnel operation phase. This ITA Tech Session was a great opportunity to find precious answers to the questions and challenges of our industry” Innovation-oriented, the World Tunnel Congress was also an international business-to-business meeting. In total, 285 booths were deployed in the Moscone Center, displaying the latest technical devices launched by the most important champions of the tunnelling industry The participants had also the opportunity to look through more than 180 posters that gave concrete answers to various topics directly concerning civil engineers: innovative procurement processes, cost and risk management, contractual methods, BIM technologies, and even examples of innovative underground infrastructures built worldwide (water conveyance, sewage, and storage, cross rail tunnels, Wahsington DC or Los Angeles Metro projects …).

The week ended with the 42nd General Assembly of the ITA, during which the new President of the Association, Tarcisio Celestino, a civil engineer from Brazil, was elected. The latter presented his roadmap for his three-year mandate: “ The world population will nearly double in the next three to four decades. This will bring a significant increase to the need for underground facilities which will have to be designed and constructed, in addition to the current backlog. It is the role of ITA to indicate to government, decisions makers and the population, that underground urban infrastructure is the correct way to go. Looking at the past, we find out that effort and resources have been spent in fixing mistakes like elevated transportation routes which were later on put underground. If we start it right, we will spend less to have better results than did the past generations.ITA also has to enhance its consistent contribution of the Working Groups and Committees for the improvement of design and construction techniques. By doing so and developing the idea that underground construction is safe and reliable, we can also expect, as a consequence, to throw some light upon their licensing processes. This has become a bottleneck in many countries, almost eliminating the advantages for faster and more efficient construction techniques”. read more