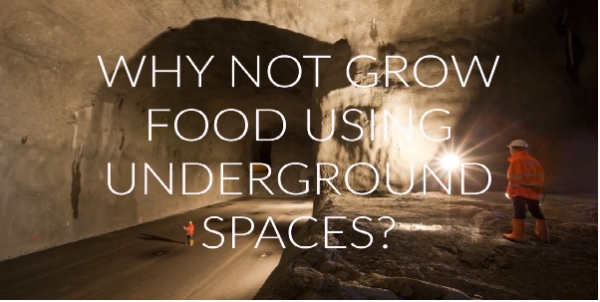 Among 143 finalists, the award was discerned to the ITACUS Committee, which work closely with ISOCARP and UN-HABITAT to help building a global vision of an urban and sustainable underground future.

The initiative shown in « Growth below» addresses issues of climate change and the UN global goals of sustainable development such as ‘zero hunger’ by using subterranean spaces, both existing and new ones. The ITA Committee on Underground Space (ITACUS) has launched this initiative, as part of their Next Level Program, with the Swiss Centre of Applied Underground Technology (SCAUT).

Inside a mountain R&D facility in Switzerland (Hagerbach Test Gallery), less than one hour from Zurich and close to Davos and Vaduz, vegetables are being grown together with fish in a prototype facility that goes one step up from a similar initiative already producing greens below the streets of London.

It relies on creating a prototype underground green farm which produces vegetables and fish using aquaponics. The aim is to link this up with an underground data center, using the heat produced by the servers to warm the water in the fish ponds in the near future. The initiative is to demonstrate the way forward in finding circular solutions. These solutions are to tackle challenges of food security and additionally reduce the carbon foot print by integrating into urban data centers that are needed for the internet of things. By effectively combining new technologies, food can be consumed locally, where it is produced.