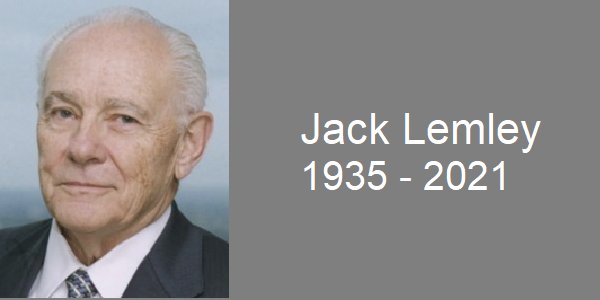 In memoriam of Jack Lemley

Jack Lemley passed away in Boise, Idaho, USA surrounded by his wife Pamela and other members of his family  on November 29, 2021 from natural causes, he was 86 years old.

All the ITA is profondly saddened and lost a friend, colleague, co-worker and mentor. Lemley was elected in 1983 as the fourth President of the ITA, International Tunnelling and Underground Space Association, for the three year period to 1986, presiding over the early expansion of the Association and the Annual General Assemblies of Member Nation representatives.

Jack’s remarkable lifetime achievements took him from Coeur d’ Alene to the University of Idaho where he graduated in 1960  and on to a 50+ year career working all over the world on industrial infrastructure, design and construction projects.

Jack commenced his career working for Guy F. Atkinson, Co in the 1960’s. on projects throughout the United States. This included Seattle’s I-5 running through downtown Seattle and supervising the building of 25 miles of water tunnels underneath New York City in the 1970’s.

In 1978 Jack returned to Idaho and took up a senior position with Morrison Knudsen Company and was immediately charged with the construction of King Khalid Military City “KKMC” in Saudi Arabia. Throughout the 1980s Jack supervised projects all around the world for Morrison Knudsen.

In 1989 Jack became the Chairman of Transmanch-Link “TML” a joint venture of 5 British and French construction companies that built the Channel Tunnel, linking Britain and France under the English Channel.

Upon completion of the “Chunnel ” Jack returned to Idaho, which he considered home throughout his life, and founded Lemley International Inc. a global management and consulting firm established to serve public and private clients worldwide. Among the many projects Lemley International was involved with include FERMI National Laboratory, Holland Tunnel renovation, London Underground LTD, Athens Greece Metro, Hong Kong Airport, and work on a special project near and dear to him, consulting on the renovation of the Idaho State Capitol Building.

In 2005 Jack assumed the authority for delivering all the infrastructure for the London Olympics 2012 . He returned to Lemley International and ultimately retired in 2012.

We will remember him fondly. Rest in peace Jack Lemley.