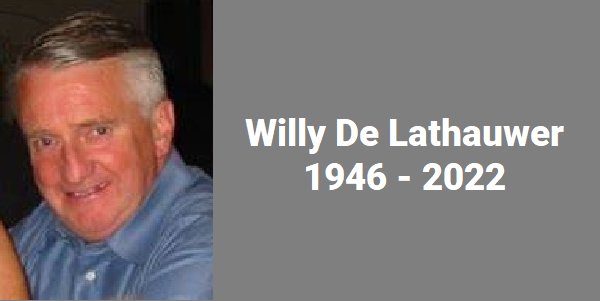 In memoriam of Willy De Lathauwer

ABTUS-BVOTS has lost one of its founders!
It is with deep sadness that the ABTUS-BVOTS, the Belgian Association for Underground Techniques and Urbanism, announces the passing of Willy De Lathauwer. He passed away in Bruges, Belgium, on April 5, 2022. He was 75 years old.
De Lathauwer was born in Gent, Belgium on November 13, 1946. After graduating as a construction engineer, he joined the public administration directly, first at the Ponts et Chaussées, and then at the General Directorate for Land Transport, in which he remained until his retirement in December 2004, having reached the position of Chief Engineer - Director.
He represented Belgium in several international working groups, including the World Road Association (PIARC), where he was the French-speaking secretary of the "road tunnel operation" committee.
He was also one of the founding members of ABTUS-BVOTS in 1977, with the successive functions of Director & Secretary (1977-1982), Director & Secretary-General (1982-2009) & Secretary-General (2009-2017).
Still on the  international scene, he was a member of the ITA-AITES Board of Directors, even serving as Vice-President during 3 years(1995-1997).
For those who knew him, De Lathauwer was dynamic, enthusiastic, perfectionist and extremely kind. We will remember him fondly. Rest in peace Willy!