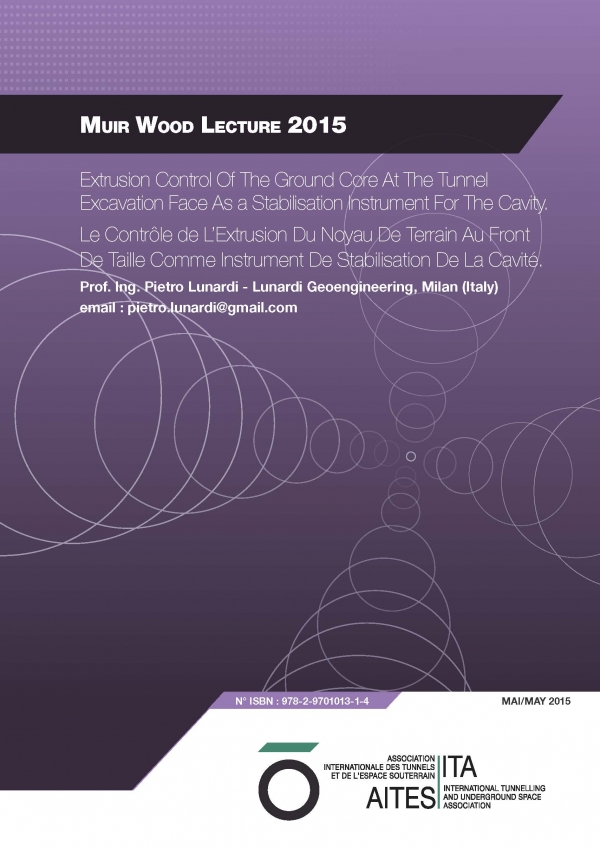 Extrusion Control Of The Ground Core At The Tunnel Excavation Face As a Stabilisation Instrument For The Cavity.

I am truly honoured for this invitation to hold an important lecture in memory of Mr. Alain Muir Wood, one of the most eminent English engineers specialised in tunnelling, who was at the forefront in some of the most important tunnel projects of the previous century. It is known how he always insisted (one of the few of his time) «on during the design stage».For this reason, in his honour, I would like to illustrate the rigorously oute that me and my collaborators have followed, inspired by the observation of a particular deformation phenomenon which occurred while tunnelling through Frejus, and the theoretical and experimental research which followed. This path led to the formulation of the Analysis of Controlled Deformation in Rocks and Soils, an approach for planning and constructing underground works which has become universally valid for both conventional and TBM excavation in any type of ground or stress-strain condition.In a brief but detailed manner, I therefore intend to talk about:•  the phenomenon which inspired me to conduct the first-in-depth research on the true essence of the Deformation Response of the mass to the action of excavation;•  the methods and goals implemented during this Research in terms of Analysis and Control of the Deformation Response and the results garnered from “sample sites”, which brought about the formulation of a different design and construction approach;•  the application and final validation of the new approach in two strategic tunnelling sites;•  and finall, the studies carried out on non-linear 3D numerical models and on physical models in a reduced scale, which etically – the validity of the ideas brought about by the experimental evidence at the base of this approach.Always remembering that the Earth’s crust is made up of material that is subject to strnature and which must therefore be considered a «living thing» that tends to deform as a reaction to excavation and therefore generate a Deformation Response which must always be the focus of any designer of underground works.