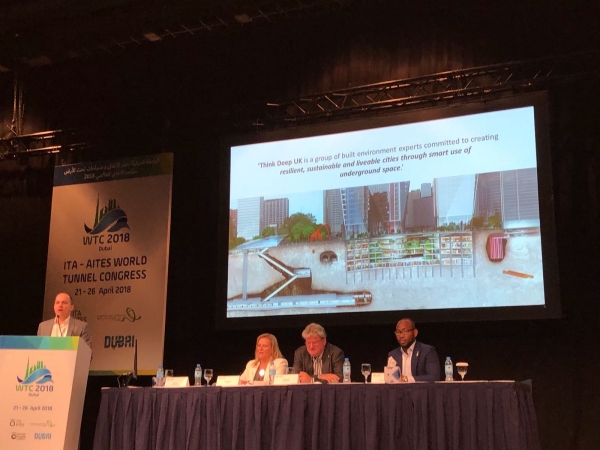 ITACUS all present at WTC 2018

The World Tunnelling and Underground Space Congress was held in Dubai, UAE, from 20-25 April 2018. ITACUS was very much present starting with two lectures by Antonia Cornaro and Han Admiraal during the ITACET Foundation Training course. There was an informal meeting of the ITACUS Steering Board and Advisory Board on Monday afternoon. During this meeting, Rosanne Verloop was confirmed as the Young Talent Program ambassador. On Tuesday morning the co-chairs of ITACUS presented their book 'Underground Spaces Unveiled'. In the afternoon a well attended ITACUS Open Session was held with topics ranging from Virtual Reality to Underground Green Farming. During the General Assembly on Wednesday afternoon Han Admiraal held the annual State of Underground Space speech which included having the members of the General Assembly and the Executive Council fold boxes with the Sustainable Development Goals printed on them. ITACUS particularly wanted to raise awareness as to the SDG's underground space use can contribute to. Thanks also to Petr Salak for presenting our Young Professionals Think Deep Program YPTDP. Petr also presented Think Deep UK as part of our National Actions Think Deep Program NATDP. Abidemi Agwor presented the Think Deep Naija campaign, also a NATDP initiative.

For more information please read the press release by ITA, which can be found here.