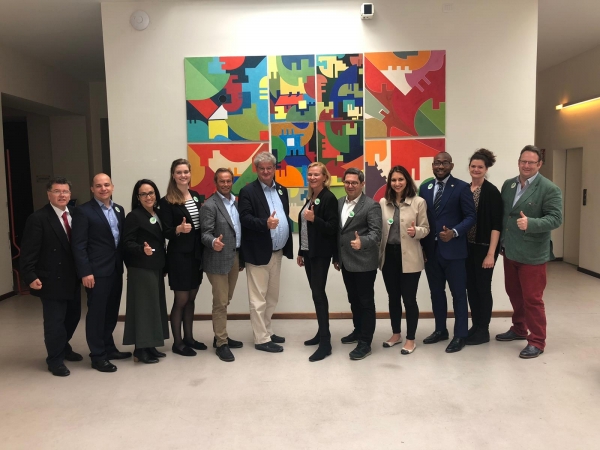 ITACUS had a powerful presence at the WTC 2019 "Tunnels and Underground Cities – Engineering and Innovation meets Archaeology, Architecture and Art (AAA)", held in Naples, Italy.

On May 5 we held our Steering Board meeting in full attendance discussing our new strategy and activity groups. The same afternoon we held a workshop "Beyond Tunnelling – A Manifesto for National Action Groups". This was conducted by Marilu Melo (Think Deep Down Under) and Loretta von der Tann (Think Deep UK) and attracted approximately 35 participants. Through various ice breaking and brainstorming exercises and tasks, a major inspiration was felt amongst all. ITACUS will consolidate the workshop results and share them with all when finalised.

On three consecutive days the AAA off-site events were held with invited architects, such as Elizabeth Reynolds from Urben on "Underground Urbanism and integrating archaeology, architecture and art into contemporary development", and Elsa Wifstrand from &Rundquist Arkitekter on "Art and Public Transportation – a continuing journey in the development of the yellow metro line in Stockholm". The offsite events included a tour through the historic Bourbon tunnel complex which was fascinating for all attendees.

On May 8, we held two open ITACUS sessions on "Strategic Use of Underground Space for Resilient Cities" with two ITACUS special reports, one focusing on our new Strategy and activity groups, as well as our industry partners SCAUT, highlighting its underground green farming pilot. The morning session also included a third keynote speaker invited by ITACUS, Dominique Perrault from DPA in Paris, who presented on his signature "Groundscape" architecture projects. The afternoon session showcased our Think Deep National Action Program with members of Think Deep UK, Think Deep Sweden, Think Deep Down Under outlining their activities and objectives. We also heard a summary of the Manifesto workshop, described above. Several interesting and thought-provoking paper presentations were held in these sessions, including the one from Stephanie Bricker on "Investing in urban underground space – Maximising the social benefits", a blue paper recently produced by TDUK.

The annual report of ITACUS activities to the General Assembly of ITA, parallel to the afternoon session on May 8, rounded off our presence at the ITA-AITES WTC 2019 in Naples. In delivering the report ITACUS co-chair Han Admiraal said:

"ITACUS can proudly say that apart from the Next Level programme we now have five activity groups:

We are a great team eager to promote the ITACUS strategy which also includes the Next Level Program. We have our own Young Talent Ambassador in Rosanne Verloop and a Scientific Ambassador in Prof. Youssef Diab. The outcomes of the ITACUS manifesto workshop so brilliantly led by Marilu Melo and Loretta von der Tann will be of relevance. The enthusiasm and engagement of the people that are forming our Think Deep groups is based on just that. On the belief that urban underground spaces can really make a difference and contribute to the needs of cities but also deliver benefits hitherto unknown."