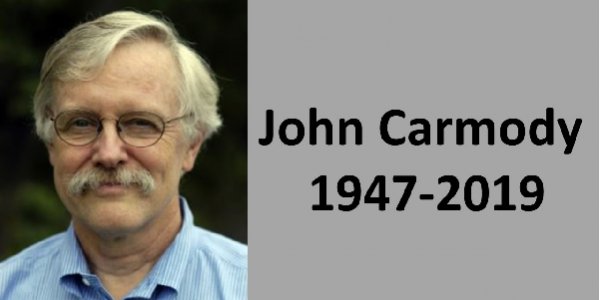 The underground space use community loses a key contributor

Most of you in the underground space planning and design field will recognize the name of John Carmody who died on December 9, 2019 at the age of 72.

I would like to concentrate on the impact that he made during his role as Associate Director of the Underground Space Center at the University of Minnesota.

John’s first connection to underground space use came after his time in the Dominican Republic as a Peace Corps volunteer. With a degree in Architecture, John was a perfect collaborator on the book Earth Sheltered Housing Design which was the first publication (in 1978) produced by the newly created Underground Space Center. John not only developed the architectural sections of the book but prepared most of the illustrations and supervised the graphical layout and production of the book. Coming at a time of great public interest about energy and environmental issues, the book was a great success and went on to sell over 250,000 copies and to be translated into Chinese, French, Spanish and Russian. John then stayed with the Underground Space Center as its Associate Director for nearly 20 years until its closure in 1995. At that time, he transitioned within the University of Minnesota to become the Director of the Center for Sustainable Building Research – continuing many of the underlying research themes that were present in his underground space research. During his time at the Underground Space Center, John co-wrote several more books including Earth Sheltered Community Design: The Design of Energy Efficient Residential Communities (1980) (which won the 1981 Architecture and Urban Planning Award from the Assoc. of American Publishers), Underground Building Design (1983), Building Foundation Handbook (1988) and Underground Space Design:  A Guide to Subsurface Utilization and Design for People in Underground Spaces (1993). In the preparation of the Underground Space Design book, John had the opportunity to research deeply the issues surrounding people using and working in underground spaces and from this he was able clearly and effectively organize and present the major principles behind creating successful people-oriented underground spaces. While not becoming a coffee-table book like Earth Sheltered Housing Design, this book became a landmark work in its own right.

John was a very talented individual but also a fun colleague with whom to work and travel. As his obituary eloquently states, “John's kindness, compassion, appreciation for beauty, search for peace, and sense of humor will be remembered by all whose lives he touched.”