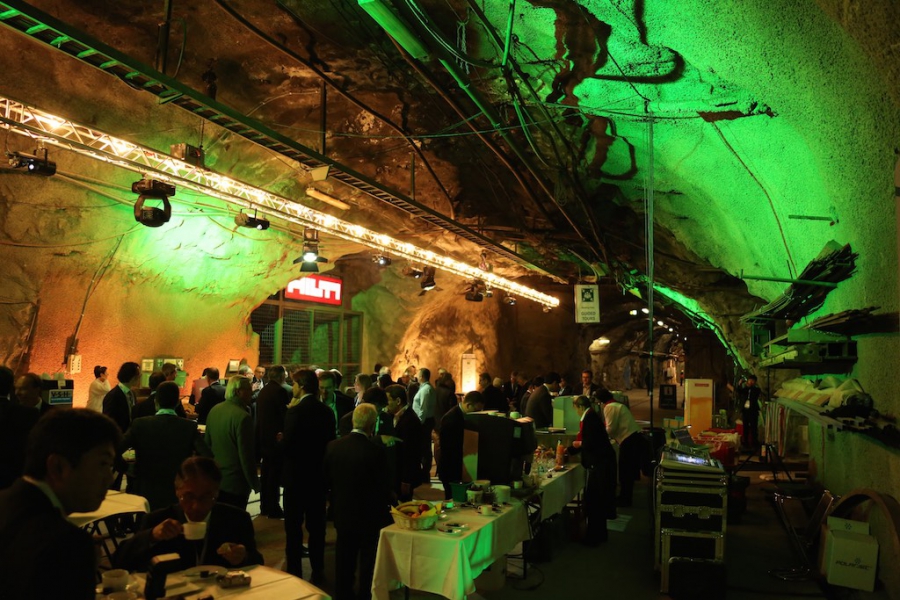 ITA Tunnelling Aawards: The ITA rewards the 11 outstanding projects and engineers of the year 2015

Thursday, 19thof November 2015, was the D Day for the 24 projects’ representatives, the 8 engineers, the 5 engineering companies and the 5 contractors that presented their candidacy to the ITA Tunnelling Awards in Hagerbach, Switzerland: 11 outstanding profiles and projects have finally been awarded. 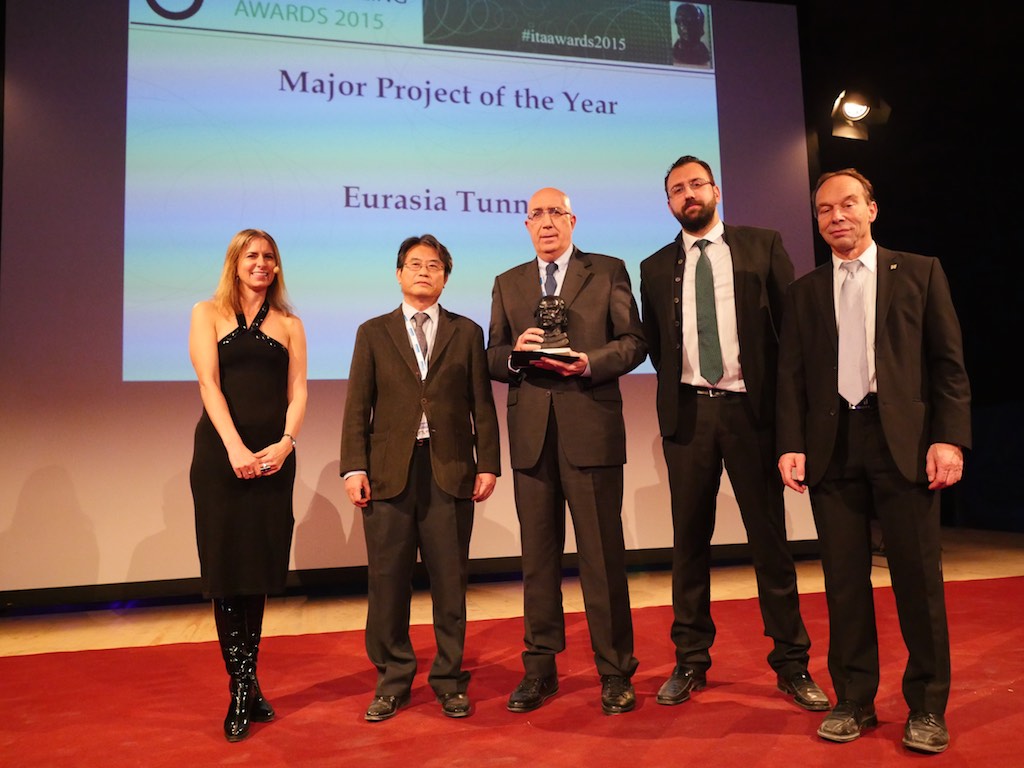 The Eurasia Tunnel Project (Istanbul Strait Road Tube Crossing Project) will connect the Asian and European sides via a highway tunnel going underneath the Bosphorus. 5.4 kilometers of the project will comprise a two-storey tunnel to be constructed underneath the seabed using special technology. To successfully deal with the complex challenges at the Istanbul Strait Road Tube Crossing Project, the 13,7m mix shield from Herrenknecht was designed exclusively for the construction joint venture and included a number of specially developed features such as 19’ disc cutters with internal pressure compensation device or hyperbaric transfer shuffle. Specifically innovated, developed and designed seismic joins that can resist under 12 bar pressure were installed to accommodate differential displacements at proper locations at the transition zones between rock and soft soils.

THe Tunnelling Project of the Year 2015 (from €50m to €500m): the 1ST PHASE OF LOW AND INTERMEDIATE LEVEL RADIOACTIVE WASTE DISPOSAL FACILITY CONSTRUCTION IN KOREA (LILW) 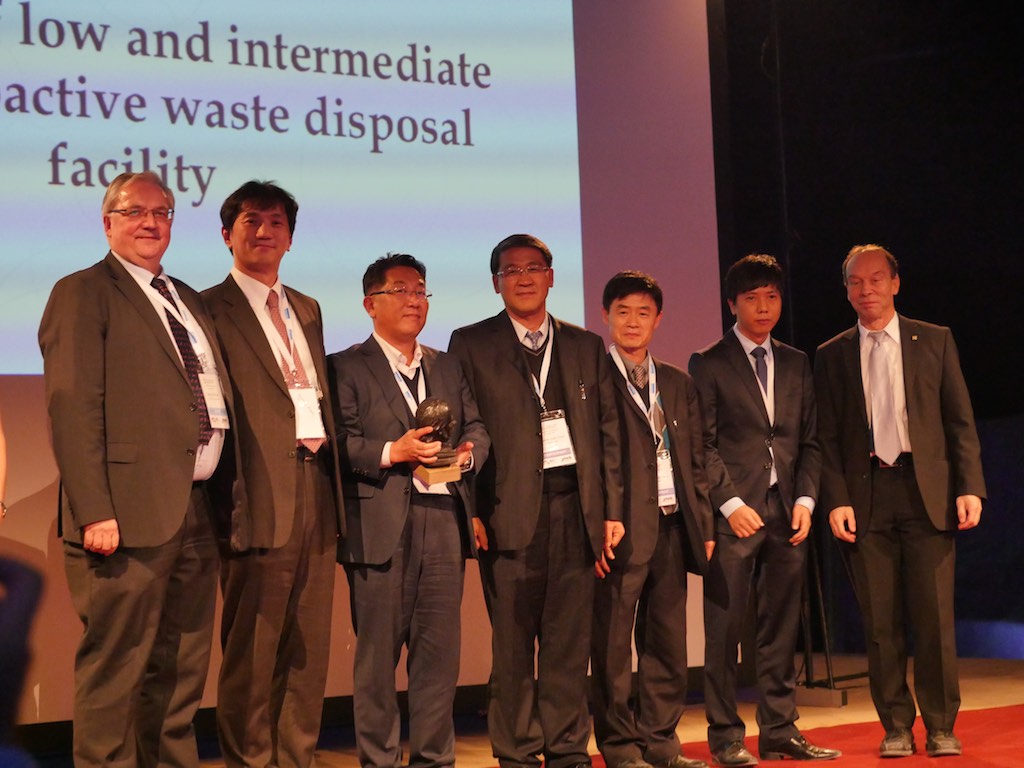 In December 2005, the South Korean Government designated Gyeongju-city as a host city of Low- and Intermediate-Level Radioactive Waste (LILW) disposal site through local referendums held in regions whose local governments had applied to host disposal facility in accordance with the site selection procedures. Bongilri, Yangbuk-myeon, Gyeongju, was finally chosen to host the LILW disposal facility. The first phase of the project has just been awarded as the tunnelling project of the year in the framework of the ITA Tunnelling Awards 2015.

Indeed, the site can hold up to 800,000 drums (160,00m3) of low and intermediate level of radioactive waste. A disposal facility was constructed to store 100,000 drums (20,000m3) of LILW. It consists in six silos storing LILW and a 3.9km access tunnel. For the geometrical shape of silos, the shape of a dome and a cylinder was chosen to ensure both the mechanical stability and the maximum storage space with less excavation. Until now, such a deep underground space for a disposal facility of LILW had only been constructed in Finland and Sweden, for geotechnical conditions were relatively better compared to Korea’s. The technology used to storage a facility for radioactive waste constitutes an unprecedented example of a disposal facility’s construction. It can easily be reproduced for the 98 nuclear plants located in Korea, China, and Japan.

NORSBORG METRO DEPOT: theOutstanding Tunnelling Project of the Year (up to €50m) 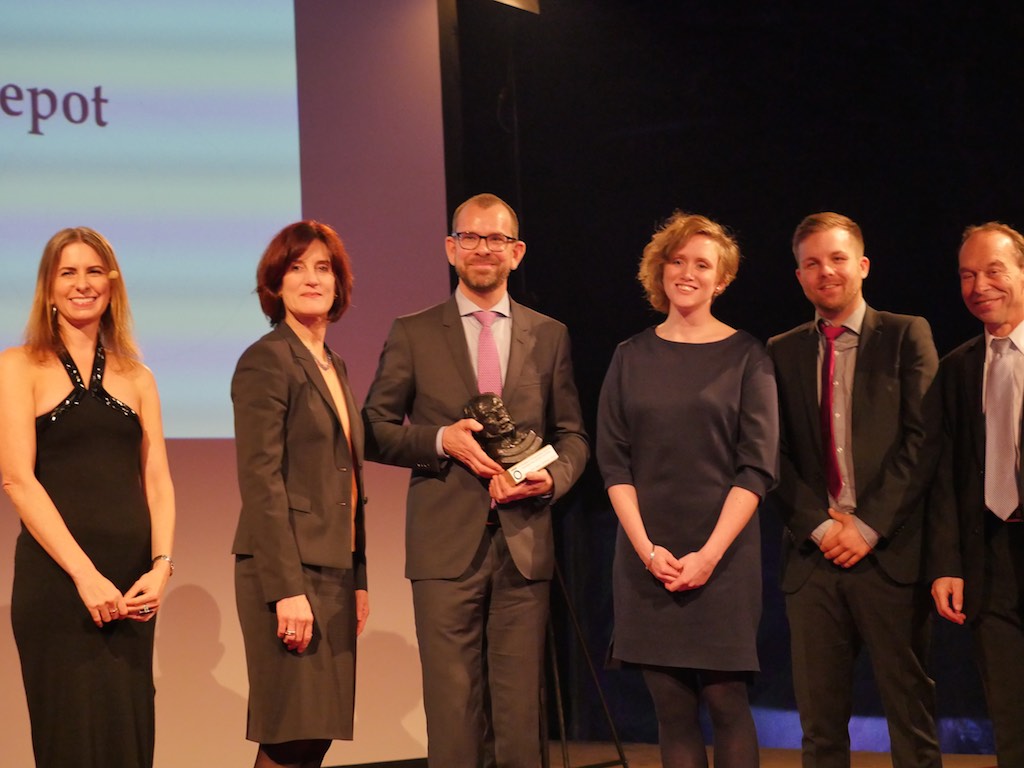 The Norsborg Metro Depot is an important part of the development of the Stockholm metro system. The depot will provide storage, train wash and service areas for 17 trains and will also be a working place for 100 employees. The depot is located underground in hard rock. It consists in three rock caverns, 300 by 24 meters each, connecting tunnels and areas for technical equipment. Conventional drill and blast method with top modern equipment were used. The total rock volume is 320 000 cubic meters and the total length of the tunnels and caverns is 3000 meters. The scope of the project led to the division into two contracts:

Between 2013 and 2015, the construction company Skanska excavated the tunnels and caverns that will serve as storage for the metro depot. The complete depot is to be finished by 2017.

The Technical Innovation of the Year: AN INNOVATIVE VEHICLE-MOUNTED GPR TECHNIQUE FOR FAST AND EFFICIENT MONITORING OF TUNNEL LINING STRUCTURE CONDITIONS 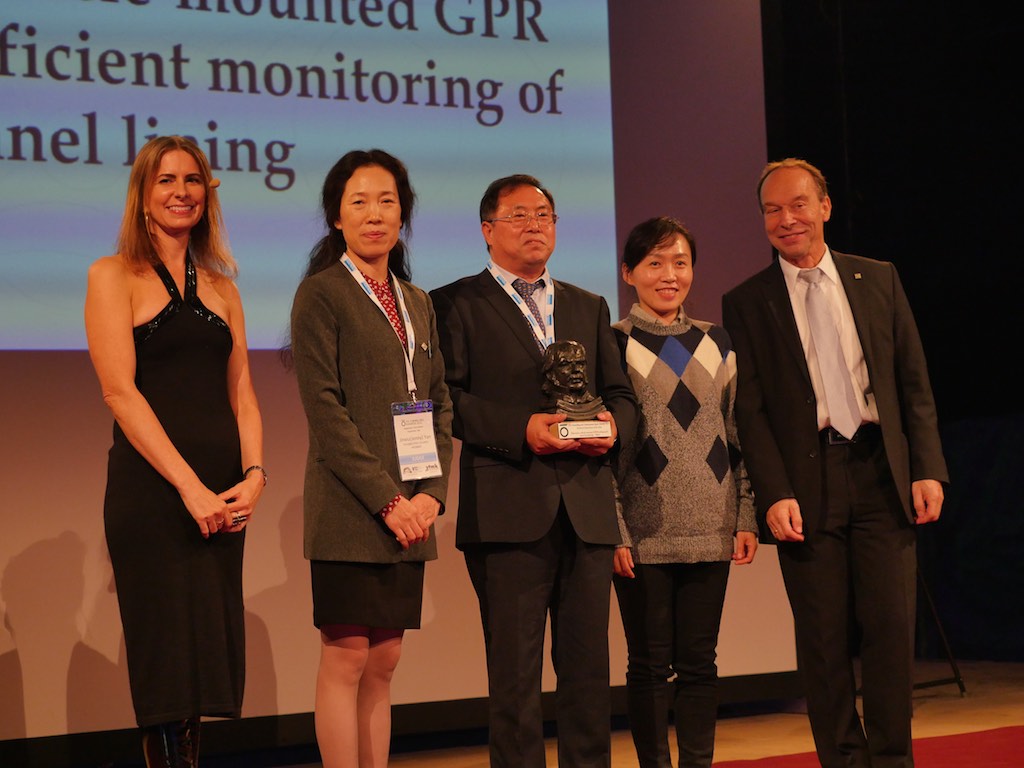 This vehicle-mounted GPR innovation is a non-contact and non-destructive testing technique very useful in the field of operation tunnel health status evaluation.  Indeed, its air-launched antennas can detect linings and surrounding rock conditions in considerable depth (from 0.9m to 2.25m underground). Such technique has already been used in of 91 tunnel inspections, with a total of 122km inspected through the Railway vehicle-mounted GPR technique.

The test tunnels are located in the Baoji-Zhongwei line, Xiangfan-Chongqing line under the jurisdiction of Xian Railway Bureau. Just as the old line of Xiangfan-Chongqing line, where the tunnels approaching to the design life, aging problem is particularly prominent. Railway vehicle-mounted GPR technique for tunnel detection can detect the tunnel linings of national railway network and complete the tunnel defect census in a short time. This technique solves the major problems on national railway network tunnel safety inspection and has obvious social benefits.

The Environmental Initiative of the Year: THE CORRIB TUNNEL PROJECT IN IRELAND 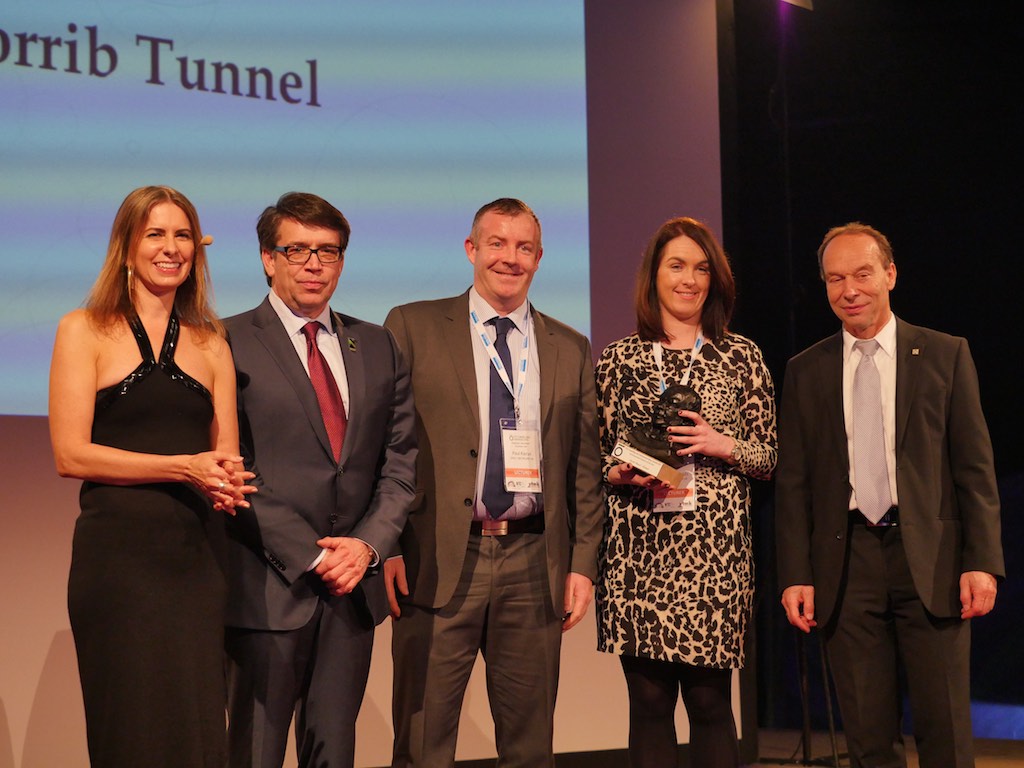 The Corrib tunnel, located on the Irish North was coast, aims at permitting Ireland to exploit a gas field in the Atlantic construction without harming the coastal environment surrounding the planned gas pipeline. The key criterion in the identification of the modified route, underpassing the Sruwaddacon Bay between Glengad and Aughoose, was the trenchless underground construction of a 4.9km long section due to the environmental impact of its location.

Regarding the sensitive nature reserve surrounding the project, the client SEPIL has decided to install the 20’ gas pipeline with all its relevant accessory components in 4.9km tunnel. The construction of this TBM Corrib tunnel has required a specific fit-out: a gas pipeline and a backfill equipment.

The tunnel was to be driven in advance by mechanized means with the residual tunnel cross-section subsequently being backfilled. The final alignment of the onshore pipeline section was the result of an intensive development process with the aim of minimizing and mitigating the impact of the proposed route on the environment. 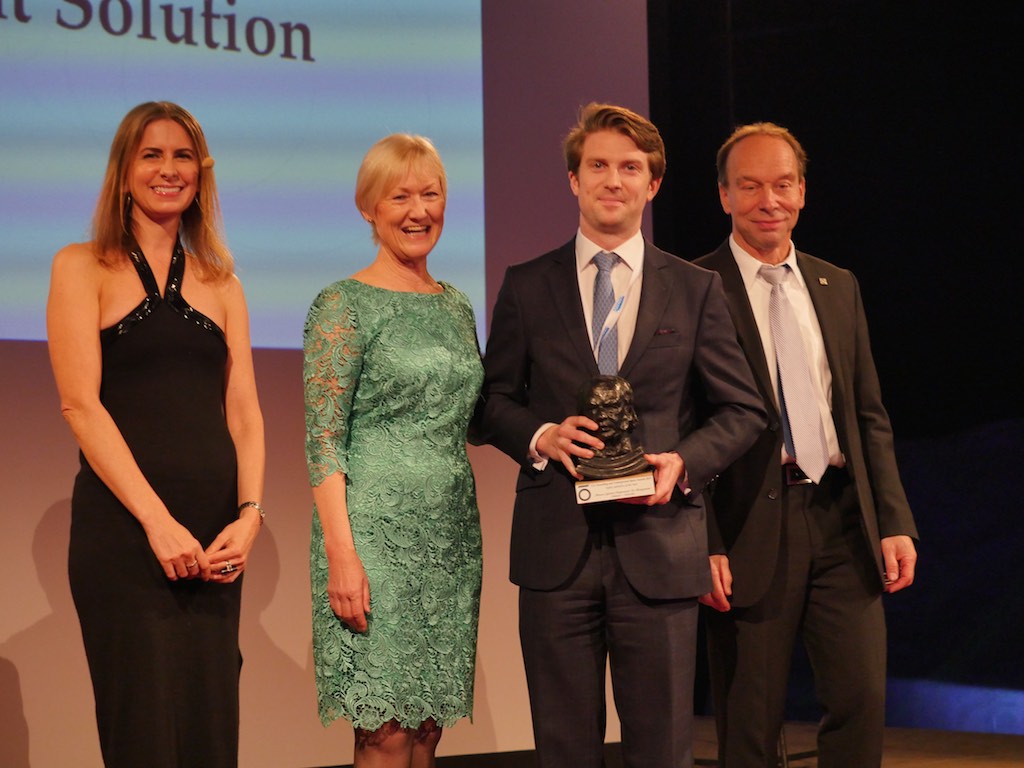 Emergency refuge forms an integral part of a tunneling project’s wider Emergency Response Plan (ERP). In an emergency situation (such as a tunnel fire) when evacuation is no-longer sage or practical, a refuge chamber is designed to provide a safe and secure ‘go-to’ area for personnel to gather and await extraction. In looking for a solution to the ITA Guideline’s requirement for the use of compressed air and to maintain positive pressure to refuge chambers to avoid ingress of toxins, MineARC’s engineering team has developed a breathable air system that is unique to the market; offering a range of new features aimed at reducing running costs and improving operational safety during an emergency. This system is called the Compressed Air Management System or CAMS.

THE TOLEDO METRO STATION ON LINE 1 IN NAPLES, AN Innovative Use of Underground Space: 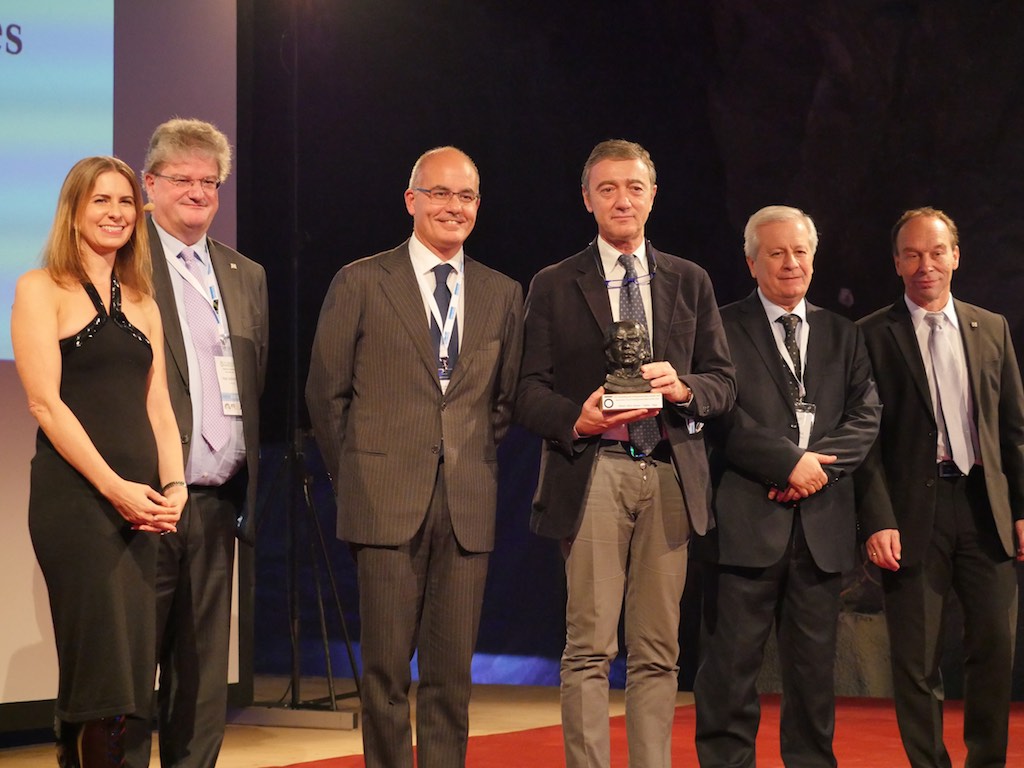 The Toledo Station is a unique example of a decentralized museum, offering dynamic fruition of the artists’ creations, as the citizens have the possibility to travel along an open artistic itinerary. Building the station has involved the re-systemisation of the surrounding urban context.

In fact, the underground works include a long pedestrian passageway starting from the service tunnel, and linking the pedestrian platforms to the secondary exit in Piazzetta Montecalvario, a square that has been regenerated and re-qualified with positive effects for the surrounding Spanish Quarters (built in the sixteenth century under the Spanish Viceroy).

In addition to the underground works, part of the Via Diaz above the main shaft, has now become a broad pedestrian square. Trees were planted in the narrow area whilst along the southern perimeter, parasols have been arranged to protect the streets stalls that were formerly scattered over the pavement in Vesuvian basalt, lending grace and comfort to the area.

KARLOVSEK JURIJ, The Young Tunneller of the Year 2015: 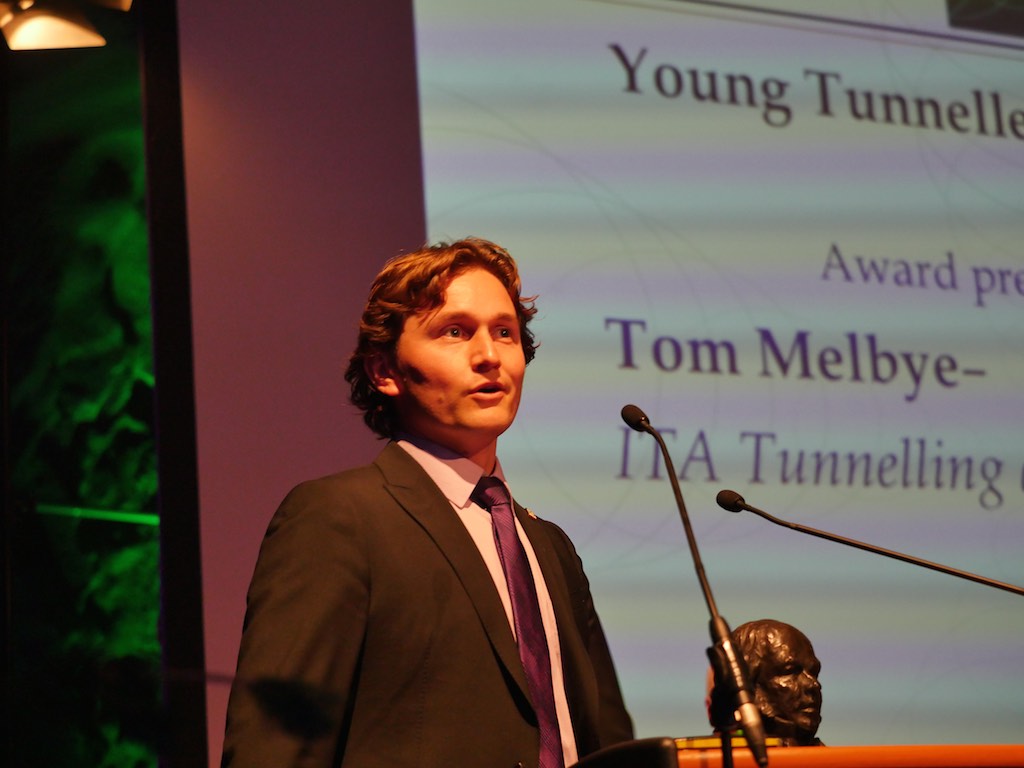 Jurij is a Civil Engineer specialized in Geotechnical Engineering, and particularly in tunnelling. His philosophy is grounded in the belief that industry and academia should work together in the pursuit of excellence and innovation. He currently works as a Postdoctoral Research Fellow at the University of Queensland, Australia, where he recently obtained his PhD in the field of TBM segmental lining integrity detection. To date, Jurij’s professional career spans three continents, with a strong academic and industrial experience. Jurij’s latest achievement is his position as founding Chair of International Tunnelling Association and Underground Space Young Member’s Group.

THE Engineering of the Year: WSP-PARSONS BRINCKERHOFF 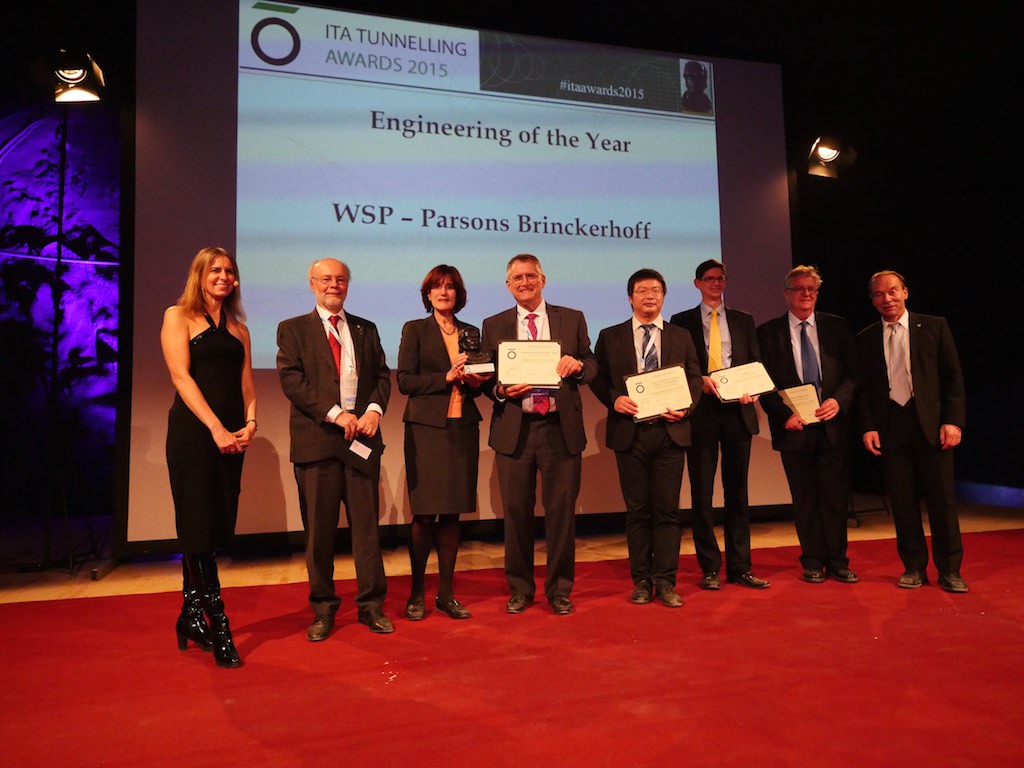 WSP and Parsons Brinckerhoff have combined to become, from now on, one of the world’s leading engineering professional services consulting firms. Together they provide services to transform the built environment and restore the natural environment. Their expertise ranges from environmental remediation to urban planning, from developing the energy sources of the future to enabling new ways of extracting essential resources. They have approximately 34,500 employees, including engineers, technicians, scientists, architects, planners, surveyors, program and construction management professionals, and various environmental experts. They own more than 500 offices across 40 countries worldwide.

The contractor of the Year: SALINI – IMPREGILO 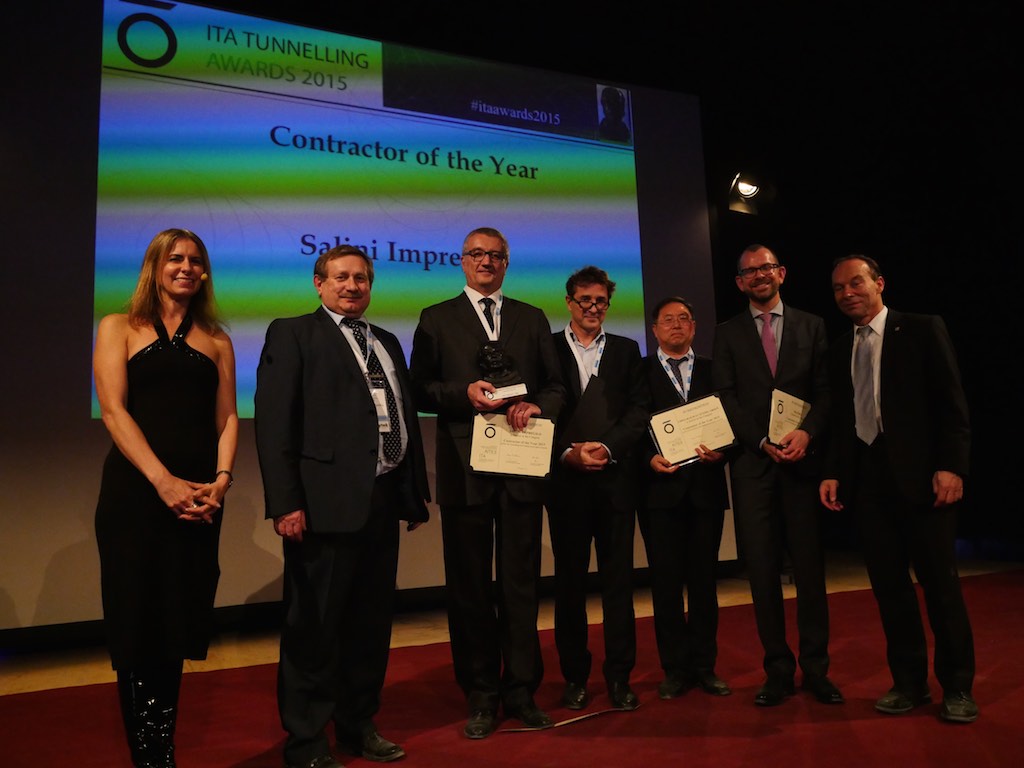 Salini Impregilo is operative in over 50 countries with roughly 34,400 employees and a turnover of about € 4.2 billion (as at 31-12-2014). The Group is a pure player in the construction sector, with 110 years of experience, focusing on complex and large civil engineering projects: dams and hydroelectric plants, railways and subways, roads and highways, civil, industrial construction and airports. The Group track-record includes:

230 dams and hydroelectric plants, 1,350 km of underground works, 6, 730 km of railways, 375 km of metro systems, 36,500 km of roads and motorways, 330 km of bridges and viaducts. The management and the entire Group are committed to operate in accordance with environmental, ethical and professional principles, which comply with the highest international criteria for corporate governance and citizenship. 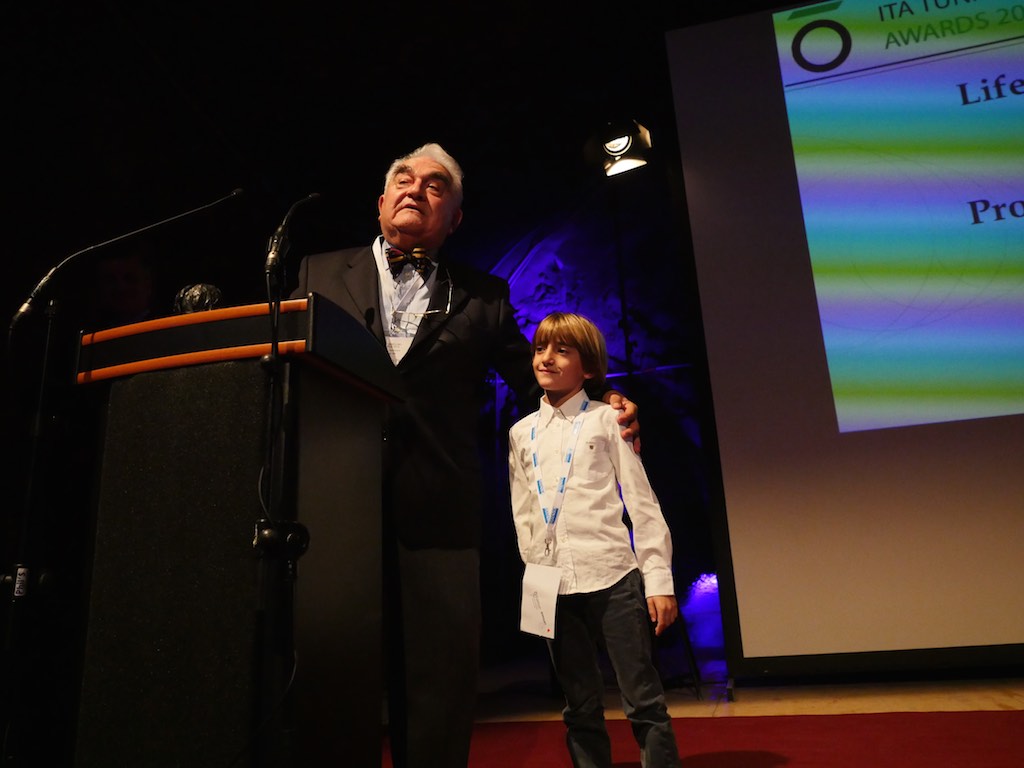 Sebastiano Pelizza received a degree in Mining Engineering from the University of Technology of Turin in 1961. He is now a full professor on “Tunnel Construction” at this University and he is also the Scientific Director of the one year post-graduate Master Course on “Tunnelling and Tunnel Boring Machines”. He has a strong academic career behind him: he gave courses, seminars and special Conferences on tunnelling and underground works all over the world, from Seoul to Lausanne including places like Istanbul, Jakarta, Rome or Saint Petersburg. Specialized in underground constructions, he has designed and supervised the construction of more than 100 tunnels in Italy and abroad (Turkey, Saud Arabia, Venezuela, Greece, Taiwan…). The quality of his works is reflected by the awards he received: he has been appointed Doctor Honoris Causa in Tunneling at the Technical University of Civil Engineering of Bucharest in 1996, Honorary Doctor of Railway Communication University of Saint Petersburg in 1998, Professor Emeritus at the University Of Technology of Turin in 2009… He has been ITA President between 1995 and 1998. Since 2010, he is a member of the Supervisory Board of ITACET Foundation.