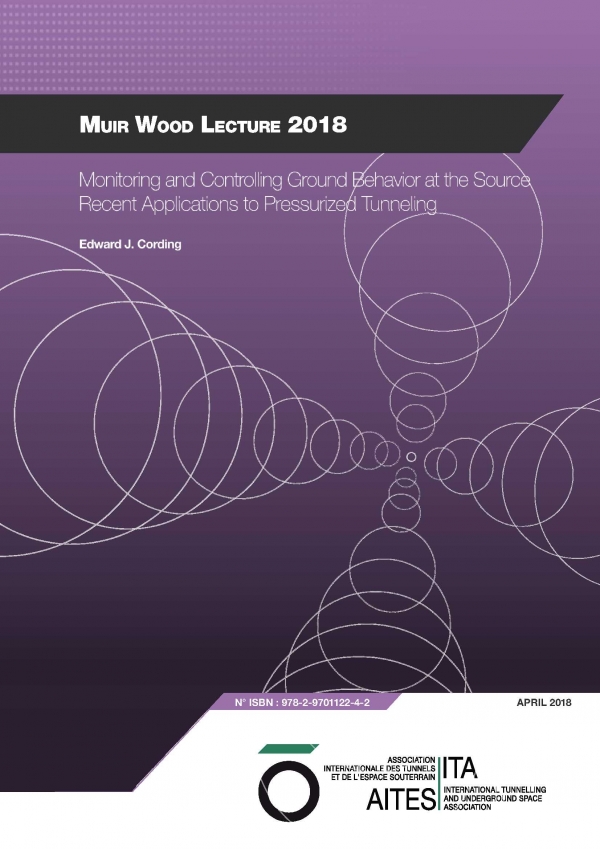 presented are investigations and guidelines for monitoring, and controlling
pressurized tunnel boring machines (TBMs) to prevent ground loss, and
damaging settlement to structures. The process begins in the planning
stages with the owner’s team and continues during construction with
a coordinated program of managing, operating and monitoring the
tunneling process.
Monitoring of ground movements at their source is at the heart of the
observational method for geotechnical projects. In large underground
rock caverns and on slopes, borehole extensometers and inclinometers
have been used for over 60 years to determine the depth of zones of
movements and locate the geologic features affecting stability. In urban
tunneling and excavation, these instruments are used to locate the
sources of ground movement that could cause damaging settlement.
For pressurized TBMs, such observations, made close to the advancing
TBM, are key to understanding and controlling ground behavior.
Examples are provided of earlier, open face shield tunneling where ground
behavior could often be observed directly. The process often relied on
the ability of the ground to stand unsupported, and the operator was
provided with equipment with which he could not always be successful.
The tunneling industry has witnessed a revolution. pressurized face TBMs-
slurry balance machines and earth pressure balance machines (EpBMs)
--- have enabled tunneling at greater depths under waterways and at
shallower depths in urban areas without damaging settlement. advances
in recent years have included the increasing capability to coordinate and
control the TBM operation and monitor key machine functions and their
impact on the surrounding environment in real time as the TBM advances.
Maintaining and monitoring a continuously pressurized envelope of
conditioned muck and injected slurries around the face and body of the
shield, and grout around the lining at the tail of the shield have resulted
in improved and consistent control of ground movements throughout the
tunnel drive.
In this paper, real time records of key TBM operating parameters
are coupled with real time observations of ground movements and
porewater pressures immediately around the advancing TBM. Borehole
extensometers, piezometers, and directionally drilled horizontal
inclinometers are used to pin-point the sources of ground movement
and groundwater changes around the TBM to aid in making adjustments
and confirming that ground control is being achieved. The results of such
observations are described for both open face shields and pressurized
face TBMs on tunneling projects in Washington, D.C, Chicago, Toronto,
Seattle and los angeles.
The benefits have been most dramatic in their application to large
diameter TBMs and to TBMs driven at shallow depth in urban areas. The
17.5-m-diameter EpBM selected for the recently-completed tunneling
for the alaskan Way Viaduct replacement project for State route 99 in
Seattle was the largest pressurized TBM to be driven beneath an urban
area. To assess and mitigate risks, the owner and contractor teams built
on previous experience with large diameter pressurized face TBMs,
including tunnels in porto (portugal), Barcelona, and Madrid driven with
9- to 15-m-diameter earth pressure balance machines (EpBMs). Ground
improvement and reinforcement methods were implemented, but the
primary and most effective ground control measures were in planning
and executing the TBM operation. Continuous pressurization of the TBM
face, shield steering gap, and lining gap at the shield tail prevented ground
loss and prevented damaging settlement throughout the drive beneath
Seattle structures.
Essentially, such a tunneling operation achieves the objective described
in an 1818 patent application for a tunnel shield by Marc Isambard
Brunel of “opening… the ground in such a manner that no more earth
shall be displaced than is to be filled by the shell or body of the tunnel”
(Muir Wood, 1994, Skempton and Chrimes, 1994). For the 17.5-m
EpBM, the settlements immediately above the shield were smallest
when the tunnel was at shallow depth, and there was no surface
settlement. The results were the opposite of calculations based
on an assumed percentage of ground loss, which show the largest
settlements and potential damage to structures occur when the tunnel
is at shallow depth. That can lead to prescribing ground modification
measures or adjusting the alignment to satisfy the assumption, rather
than placing primary emphasis on preventing the ground loss by
controlling the tunneling operation. recent progress has made reliable
prevention of ground loss possible with the real time linkage of TBM
operating parameters and geotechnical observations.
It is of critical importance that there be a coordinated effort among
TBM operation and geotechnical monitoring, supervision, engineering,
data management, safety, and construction management to assess
and mitigate risks, and monitor and control the tunneling operation.
Examples of such efforts are provided. Consistently controlling
pressures and minimizing settlement throughout the tunnel drive serve
as a demonstration to project participants and the community alike that
structures along the tunnel alignment will be protected