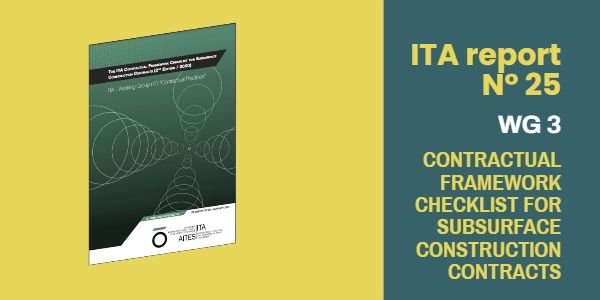 This guideline was produced by ITA WG3. The 2nd edition of the Contractual Framework Checklist builds upon the 1st edition by identifying and clarifying key contractual practice subject areas that ITA believes are fundamental for the success of subsurface construction projects independently of the form of contract and risk apportionment used. This 2nd edition also endorses third party documents that ITA considers to have special subject matter or geographic significance and will further assist formulation of contractual practices for improved project performance.

ITA believes most existing standard forms of construction guidelines and contracts could deal better with the variabilities inherent in subsurface environments, and the impact of those variabilities when an Employer seeks to have an underground facility constructed in this variable environment. Application of this Contractual Framework Checklist will help all parties achieve the ultimate objectives of on-time, on-budget and fitness for purpose delivery of the subsurface (below the surface of the earth, be it water or land) infrastructure.