The Austrian national committee of ITA participated the World Tunnel Congress in Vancouver 2010 with 5 colleagues.

In 2010 the Austrian Tunnelling Society again organized several international conferences. The most important conference were the well established “GEOMECHANICS COLLOQUIUM” and the “AUSTRIAN TUNNELDAY” in October 2010 in Salzburg which was as usual organized by the Austrian Society for Geomechanics. Besides the President of ITA, InMo Lee from Korea, about 1000 participants from more than 20 countries followed the interesting topics presented by national and international speakers.

All participants of the congress were given the newest book of the Austrian Society for Geomechanics “NATM – the Austrian practice of conventional tunneling”. 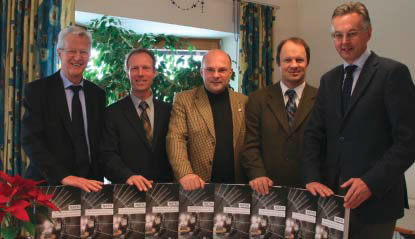 Considering the activities of the Austrian railway organisation OEBB in the western part of Austria the finishing works for the new railway in the Tyrol’s Lower Inn Valley passed a further milestone with the punctual completion of 34 kilometers of track in the new tunnels. With continuous working, the contractors appointed by ÖBB-Infrastruktur AG achieved a placement rate of one kilometer of permanent way per week. 16.500 cubic meters of concrete, 6.500 ÖBB–PORR track baseplates and 560 continuously welded rails were installed in the western project section. Track construction in the Lower Inn Valley continues uninterrupted. By the beginning of 2012, another 40 kilometers will be ready. In the design of the track, special attention has been paid to vibration protection for built-up areas located along the line. A total of 24 kilometers of track have been constructed using mass-spring systems. Depending on local conditions, trackbeds of varying dimensions are placed on elastic point or surface bearings. Installation of the mass-spring systems also has been largely completed. The new Lower Inn Valley railway is part of the Brenner railway axis from Berlin to Palermo. The project is supported by the European Commission, which is providing funding for the further development of the Trans-European Networks (TEN). The forty kilometer section which is now under construction to the east of Innsbruck serves as the northern approach to the Brenner Base Tunnel and is designed to overcome capacity bottlenecks on the existing railway. 32 kilometers of the project involve new twin-track tunnel sections. A three-track section with a length of 2.3 kilometers will serve as an underground overtaking section. The tunnels in the Inn Valley have been constructed using practically all the standard methods. In addition to mixed-face excavation, two 13-meter diameter slurry shield machines were deployed. The work also involved cut-and-cover tunnel construction in the presence of groundwater from the River Inn, tunnel sections constructed with the help of jet grouting envelopes, and tunnel excavation under compressed air. The new Kundl – Baumkirchen line is equipped for ETCS Level 2 running throughout and will become operational in December 2012.

ASFINAG – Autobahnen- und Schnellstrassen Finanzierungs-Aktiengesellschaft – undertakes the design, financing, construction and maintenance as well as the charging of tolls for Austria's entire motorway and expressway system, which includes an overall length of more than 2.100 km with 139 tunnels (114 twin tunnels and 25 single-tube tunnels) in operation, with a total about 324 km tube length. The tunnel projects under design and construction correspond to a total length of about 150 km. Since ASFINAG launched its tunnel-construction offensive in 2001, approximately 4 billion euros have been invested into tunnel safety, i.e. new tunnels, second tubes for twin tunnel projects, structural and electro-mechanical measures including overall refurbishment schemes as well the upgrading of central monitoring stations. 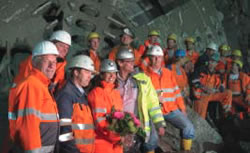 With its length of about 6.6 km, the second tube of the Pfänder Tunnel on the A14, Rheintal Motorway, is the longest tunnel at present under construction. Hard-rock tunnelling with a single-shield tunnel boring machine (TBM-S, 11.92 m in diameter) was completed within an extremely short period of 14 months. Highly challenging geotechnical problems need to be faced at the Bosruck tunnel site on the A9 Pyhrn Motorway. Since squeezing rock has severely affected the first tube during its 35 years of operation, new primary and final linings will be installed over substantial lengths as soon as the second tube, now under construction, is finished. The commissioning of the Tauern tunnel, which is about 5.4 km long, before the summer of 2011 will mark the overall completion of the Tauern twin-tunnel project on the A10 Tauern Motorway. ASFINAG's largest tunnel project, a twin-tunnel passage of some 8km in length beneath the River Danube and the Lobau National Park on the S1 Vienna Outer Ring Road, is in the planning and design stage. This will involve tunnelling to a maximum depth of about 60 m using a shield tunnelling machine with a diameter of about 15 m. Completion of this project will close the motorway ring around Vienna.

VERBUND, the biggest energy producer of Austria, is a world leader in the planning and construction of hydroelectric power plants. The construction of Limberg II in Salzburg Province, authorized 20.2.2006, concludes a series of works comprising the boring with a Wirth tunnel boring machine, of the water ducts (diameter 7.03 m, length 3734 m) and the penstocks (diameter 5,80m, length ca. 577m, inclination 45º), which were excavated with a Robbins tunnel boring machine. Excavation for the powerhouse (24m x 62m and 43m height) and transformer caverns (15m x 58m and 15 m height) began in 2008 and are nearing completion. Commissioning of the water power plant should take place in early summer 2011. Reißeck II in Carinthia, a high pressure project similar to Limberg II, received regulatory approval and the green light for construction in 2010. This project, an investment of €385 Mio, is meant to connect two existing installations through a 3,500m long high pressure tunnel and an 820m inclined chute. Access ducts were tagged on in 2010 in order to bring the tunnel boring machines into operation in 2011, for the drilling of the 7m wide tunnel and penstock. Total capacity of this installation is 430 MW. (more on the ITA website)