The Danish Society for Tunnels and Underground Works has during the year 2010 arranged 6 member meetings including two technical site visits. The first technical site visit covered the 5.3 km long Leipzig City Tunnel project in Germany with 5 underground stations. The second visit and study tour covered a two day visit to tunnels in construction close to the City Centre of Stockholm in Sweden. The first site visit was to the almost 9 km long road tunnel of Norra Länken using drill & blast and cut & covers methods. Secondly a site visit was done to the 300 m long Söderström immersed railwaytunnel under construction next to the immersion site in the City Centre of Stockholm. The tunnel is detailed design by COWI and the contractor is a JV of PIHL (DK) and Züblin (D).

Members of the society have participated in the ITA General Assembly in Vancouver, Canada from 14th to 20th May 2010 including meetings in two ITA working groups. Members have also participated in activities within COSUF during 2010 and as tutor and lecturer within ITA - CET. One member is an active member of PIARC's tunnel Committee including two working groups on safety and operation of tunnels bringing back news for the Danish tunnel industry.

The progress on the Cityringen project continues. The project consist of a completely new Metro with 15 km metro circle line all underground (30 km tunnels) and 17 underground stations and will have its own maintenance and service centre. There will be 5 interchange stations to existing railway and metro lines.

In January 2011 the project went from the planning phase to the execution phase by the signing of the contracts for the Civil Works Construction and for the delivery of the Transportation Systems. For the Civil Works the contract was signed with the Copenhagen Metro Team a joint venture of the companies Salini, Trevi and Selli from Italy. The Transportation System contract was signed with Ansaldo, Italy. The contracts are design and build contract.

The civil works contract includes construction of 30 km of tunnels, construction of 17 stations and 3 underground chambers for cross - overs and bifurcations of the Metro line.

The tunnels will be constructed using four earth pressure balance TBMs in geology varying from competent lime stone to glacial deposits of clay till and sand layers. More than 500 boreholes and 17 km of seismic investigations have been performed in order to investigate the ground conditions and to provide a firm basis for the contract. The ground coverage to the tunnels varies between 5 to 30 m with generally 15 m at stations and 25 m at low points between stations.

The stations will be constructed using cut & cover method with retaining walls of either secant piles or diaphragm walls depending on the ground conditions and the depth of the walls. There are 14 so called standard stations and 3 special stations of which one has to be constructed partly in a water canal. The station boxes are generally 22 m side and 70 m long with platform depth of generally 19 m below ground. The civil works contract includes also the mechanical and electrical equipment such as power supply, tunnel and station ventilations and SCADA systems.

Works has already started in the City with utilities being relocated and archaeological excavations ongoing which all will be finalized prior to the sites being handed over to the contractor, which will happen gradually from March 2011 and onwards. The project value is 3 billion Euros and the Metro Circle Line is scheduled to open in 2018. 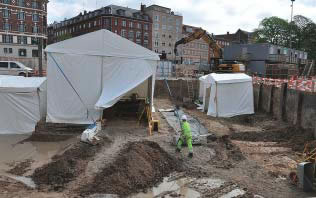 Different alignment studies have been carried out for a new Eastern Bypass around Copenhagen. In February 2009 The Danish Government presented their plan for the Danish Transport Policy until 2020. The plan states that the government will initiate a strategy analysis for the Eastern Bypass. Ramboll shall report this study of different alignments in 2011.

The feasibility of a new Oresund Fixed Link between Elsinore in Denmark and Helsingborg in Sweden has been studied during 2009-2010 by IBU-Oresund, an organization consisting of regional and local authorities on both sides of Oresund. The project was partly financed by the European Regional Development Fund. Different alignments for the fixed link have been investigated with bridge and tunnel options. Ramboll has investigated a central city-to-city link and has recommended a bored tunnel for passenger trains. The Swedish Government has initiated a more comprehensive study for the link. This study should be reported mid 2011. 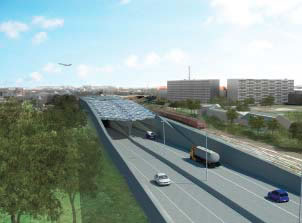 The first phase of the Marselis Boulevard Tunnel in Aarhus - connecting the Motorway system and Ring Road network with the Port of Aarhus – is under construction. The second phase with a 2 km cut & cover tunnel is delayed due to problems with the financial founding's.

The contractor PIHL has started the construction of an exceptional underground Maritime Museum located near the famous Kronborg Castle in Elsinore. The architects, B.I.G. (Bjarke Ingels Group), have created a fantastic project utilizing the old dry dock from the shut down Elsinore shipyard. The museum will be located around and inside the old dock. The client is “Maritim Museums Byg ApS” and consulting engineer is Rambøll.

The subsoil is mainly sand and gravel. In the depth 30 – 32 m below ground level the limestone starts. When the concrete dry dock was constructed during the 1950ties, a lowering of the ground water level just sufficient for the construction works was achieved, but the quantity of water pumped out into the harbour was huge due to the very permeable subsoil of sand and gravel.

A similar lowering of the ground water level for the construction of the new museum was initially deemed impossible considering neighbour buildings and the environment. The main structures including a large number of anchors against uplift and new reinforced concrete structures were then to be installed under water, with all the difficulties resulting from such an execution method.

PIHL proposed however to install a cut off wall of bentonite/cement slurry in the sand/gravel around the entire dry dock extending from the ground surface to a number of meters into the limestone. With such a cut off wall installed the main quantity of ground water, when pumping from the enclosure inside the wall, would originate only from the limestone, and the lowering of the ground water level in order to construct the museum in dry would be assumed possible.

The method was used for establishment of the dry dock in Kalundborg for the pylon caissons for the Great Belt East Bridge. PIHL was participating as one of the JV partners of GBC.

The only place where the cut off wall is not possible is under the dry dock at the entrance to the harbour. In this area the water flow is stopped by a “wall” of soilcrete columns created by jet grouting in the soil from underside dry dock to limestone surface.

When the cut off wall has been completed it is expected that only a relatively small quantity of water shall be pumped in order to lower the ground water to approx. – 9.0 m, which is sufficient. All construction works both regarding the modification and anchoring of the old dock and regarding all the new reinforced concrete structures can now be performed in the dry.

The necessary measures for this ground water lowering are very expensive, but the savings and the higher quality of the works when these are performed in the dry, more than compensates for this cost.

Close to Copenhagen Central Railway Station a new single track railway tunnel with a length of 120 m is under construction. The tunnel will be build as cut-and-cover with a high degree of complexity due to a construction site next to existing main tracks in operation. The construction works started late 2010 and the tunnel will be ready for operation by 2012. The Client is the Danish State Railway using COWI and Grontmij - Carl Bro as consulting engineers for the design. 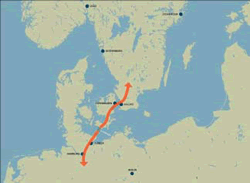 The opening of the Femern Belt Fixed Link will significantly reduce the travel time between continental Europe and Scandinavia.

A bridge and an immersed tunnel option are being designed. These designs are undertaken by separate groups of consultants commissioned by the state owned Femern A/S.

The crossing of the Femern Belt will be one of the deepest and by far the longest immersed tunnel in the world. 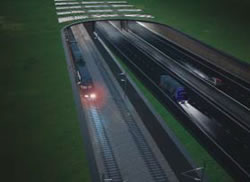 Femern A/S has in 2010 recommended the RAT immersed tunnel solution as this entails the fewest risks during the construction period and when in operation. The recommendation is based on a preliminary, comprehensive assessment of environmental and safety issues including navigational safety but also technical, traffic, time and financial issues.

Latest news and status for the planning of the combined new 18 km road and railway link crossing the Baltic Sea between Rodby (Denmark) and Puttgarden (Germany) refer to: