The society has Corporate members as well as individual members.

The Danish Society for Tunnels and UndergroundWorks has during the year 2012 arranged 6 member meetings including one technical site visit. The technical site visit was to Nordhavnsvej, a cut & cover tunnel for a new ring road in Copenhagen with a JV Pihl-Züblin as the contractor.

Members of the society have participated in the ITA General Assembly in Bangkok, Thailand including active participations in three ITA working groups. Members have also participated in activities within COSUF and ITAtech during 2012 and lecturer within ITA - CET.

The project has been delayed for approximately 1 year mainly due to the prolonged approval procedures in Germany and Denmark. Consequently the tender design is still on-going in the Ramboll-Arup-TEC JV with the Design & Build tender now planned for summer 2013. In parallel the documents for the authority approval in Germany and Denmark are being finalized by Femern A/S. The Danish Plan Approval process are scheduled to begin in June 2013 and the German Plan Approval procedure in August depending on the outcome of the on-going pre-check.

The Fehmarnbelt project is one of the biggest construction projects in Europe with an estimated construction cost of more than 5 billion Euros. The work includes an 18 km immersed tunnel connecting Germany and Denmark close to the existing Rødbyhavn-Puttgarden ferry line. The tunnel is cast in watertight concrete with road and rail tubes located adjacent to each other with two motorway tubes on the west side and two rail tubes on the east side. A central corridor for installations and an escape passage is provided between the two road tunnel tubes. 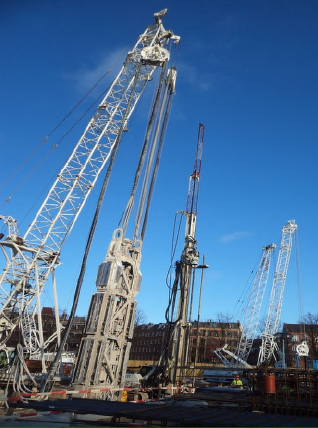 Cityringen is the biggest construction job ongoing in Denmark and major progress has been made during 2012. The project consist of a completely new Metro circle line with 15km metro all underground (30 km tunnels) and 17 underground stations in the City center of our capital Copenhagen.

With 21 construction work sites active in the center of Copenhagen the project is highly visible to visitors and inhabitants of the city. 17 of the work sites will be future stations, there are 3 construction shafts and on cut & cover tunnel section and portal. All stations and shafts are constructed as open cuts with retaining walls of secant piles or diaphragm walls. Secant piles are used at 15 sites where the pile length are up to 28 m and diaphragm walls are used at the remaining 6 sites and penetrates to a maximum depth of 44 m. Secant piling and diaphragm walling is ongoing at 11 sites (April 2013) by the use of 12 secant piling rigs and 5 diaphragm walling rigs using hydro-mills to cut the limestone are in use. All secant piling and diaphragm walling is performed by Trevi Spa of Italy as subcontractor to the main contractor consortium Copenhagen Metro Team I/S. As of April 2013, three stations and the cut & cover tunnel section have retaining walls of secant piles completed and excavation is ongoing. Two shafts have completed the D-walls and one is excavated to the full depth of 40m. 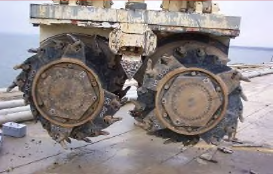 The tunnels will be constructed using four Earth Pressure Balance TBMs manufactured in a corporation between Seli of Italy and Kawaski of Japan. The first TBM arrived in Copenhagen by the end of 2012. The second will arrive in the spring of 2013 and they will start tunnelling in the summer 2013. The remaining two TBMs will start tunnelling in first half of 2014.

A 2.5 km extension of the new Cityringen metro line in Copenhagen is being designed at the moment by the Ramboll- Arup JV in association with COBE Architects. This will consist of twin running tunnels, 1.8 km long, from Sortedams Sø bifurcation chamber, running to a new underground station at Nordhavn and then a short section of cut and cover tunnel and ramp leading up to a 250 m long elevated portion of the line, terminating at the new Orientkaj station. The procurement process has started with prequalification and construction is planned to start in 2014.

Cityringen – branch off to Sydhavnen:

A feasibility study for a 4.3 km future extension of the new Cityringen metro line in Copenhagen is being prepared by COWI for the owner Metroselskabet I/S. The new section will branch-off from Cityringen by a future branch-off chamber to be located near the Control and Maintenance Centre for Cityringen. It will consist of a combination of twin bored tunnel connected to deep stations and open pit which connects to terrain stations. Six different scenarios is being analysed were the three main scenarios consists of: A solution where approximal 2.7 km will be bored tunnel, 0.6 km Cut&cover, 600 m open pit and 400 m at grade. A solution where the entire 4.3 km are bored tunnel and a combined solution consisting of 3.6 km bored tunnel, 100 m cut&cover and 600 m ramp and at grade metro. The stations will follow the concept of cut&cover stations as used on the Cityringen and two stations may be located in water canals. The metro line will connect Cityringen to the traffic intersection at Ny Ellebjerg station through the new town development area in the old south harbour area to the city centre. Decision on final alignment is expected in the autumn 2013. 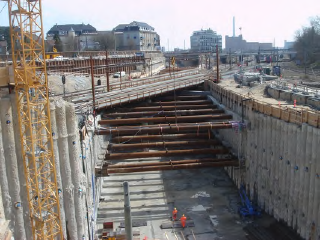 The main contract for the Northern Harbour Tunnel (Nordhavnsvej) was signed in August 2011 with the contractor JV Pihl-Züblin and the road will be opened in 2015. Nordhavnsvej will be approximately 1.65 km with a 620 m Cut & Cover tunnel. The cross section of the tunnel consists of 2 lanes in each direction.