The biannual conference of Hungarian Tunnelling Association was held in Harkány on 9th-10th November 2010.

The tunnels of the completed M6 motorway, the small and medium radioactivity waste container being under construction in Bátaapáti, the tunnels of Budapest metro M4 being in process of completion - all prove the renascence and development of the tunnel and structural engineering in Hungary. We organised the program of our conference in Harkány mainly around the upper-mentioned constructions.

On the second conference day in the afternoon the participants had the possibility to visit the Bátaapáti facility and the sites of M6 motorway tunnels.

The Congress was accompanied by a training course, with 100 participants from 10 countries and 17 lectures. This training was part and closing event of the 4-semester engineers training course, which started in 2007 with the cooperation of the Technical University of Budapest Engineers’ Training Institute.

NEWS ABOUT THE BUDAPEST METRO NETWORK:
The structural construction works of phase 1 of M4 are in process of completion. The TBMs had finished the 7 km length two parallel tunnels of 5,2m inner diameter in 2010, only some of the 10 stations are under structural construction works. The stations were realized as diaphragm wall box structure and mining method structures. The TBMs were only tracked over the station structures. At present, on the main part of the metro line, track construction works, necessary technology installations and final architectural appearance execution works are being realized.

Fővám square station is located at the bank of the river Danube. The open method diaphragm wall box strucure is between the closed method parts at both end of the station. (see picture below) 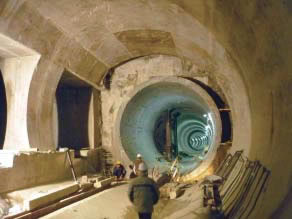 Tunnels of the M6 motorway:
The M6 motorway crosses the ridge of hill Geresd between Bátaszék and Bóly cities in a length of 10,5 km. Among the numerous alignment variants the optimum solution with the lowest cost turned out to be the one with construction of a series of structures including four tunnels and five viaducts.

The lengthiest of the four constructed tunnels is one between Bátaszék and Véménd (1331m) while three other pairs of tunnel run toward Pécs (399, 865 and 418 m). The tunnels are provided with the state-of-the-art operational and safety systems according to the EU directives (power supply, lighting, water- and fire water supply, ventilation, traffic control, internal and public telecommunication system).

Important additional facilities are the energy centers constructed outside the tunnels and the control center installed in the motorway maintenance center. The newly built tunnels are the first public tunnels in Hungary therefore their design and construction attracted an important public and professional attention.

Bátaapáti - National Radioactive Waste Deposit
The research program aimed at resolving the final disposal of the radioactive waste of small and medium activity originated from nuclear power stations has been performed since 2002 within the investment program of the Radioaktív Hulladékokat Kezelő Közhasznú Nonprofit Kft. (Radioactive Waste Material Treatment Nonprofit Ltd).

During the project execution approx. 6 km drift advance has been realized. The surface exploration works rendered possible to study thoroughly and define the geological issues, and the drift will be used later for the waste transport and further construction works.

The construction of the container chambers of nearly 90m2 rock section has not yet been started. This is not only one of the most important mining method under-ground-level structures in Hungary but for its special requirements due to its function and the ecology sensibility it is obviously in the focus of interest of all engineers.