The Department of Tunnelling and Underground Works has over 600 members who meet 4 to 7 times a year. The meetings deal with both tunnelling and underground space projects, discussing new and ongoing projects and new developments in the field of tunnelling technology.

In Amsterdam work on the new North-South Metro Line continues. This includes major works under and in front of the historic Amsterdam Central Railway station to accommodate an immersed tunnel element as part of the metro tunnel under the IJ river. The immersion is scheduled for 2011. The TBM that works under the historic old part of the city has commenced in 2010 and has succesfully finished the first trajectory along several monumental buildings.

In Delft work has been commenced on the two km cut & cover tunnel carrying four railway tracks as part of the widening of the Rotterdam – the Hague railway line. The work includes a new underground station and car parks. The tunnel will replace the elevated railway which transverses the city of Delft.

Work on the Second Coen Tunnel, an immersed tunnel under the North Sea Canal near Amsterdam in the A10 motorway, has been continued. In 2010 the tunnel elements were finished and the submerging is scheduled for 2011. 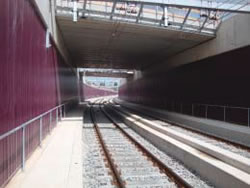 In Rotterdam the TBM-driven northern extension of the existing North-South metroline has been finished and opened to the public.

Preparation for the A2 motorway tunnel project in Maastricht has been started. The project includes a two km long cut and cover tunnel with two levels for motorway and urban traffic respectively. The plans are partly financed by redevelopment of city areas adjacent to the project.

The contract for the building of a new TBM driven tunnel under the canal from Terneuzen to Gent in the south-west part of the country near Sluiskil has been approved. Preparations will start in 2011.

The go-ahead was also given for a new tunnel project in the Hague. The Trekvliet bypass will provide a new access to the centre of the Hague via the Binkhorst Industrial Estate to the A13/A4 motorway intersection at Ypenburg. A 1,6 km bored tunnel is part of the proposed solution.

In Rotterdam the work on the Museum Park Underground Car Park has been finished. This facility includes an underground water storage basin.