The construction of 6.3 km long central part of underground line in Warsaw started in march 2010.The building permit design for 7 stations have been completed. The stations will be built using the cut and cover method, two single-track tunnels - with the use of 3 TBMs.The constructions of Rondo Daszyńskiego station, used as TBM starting shaft started at the end of october 2010. The TBMs are constructed by Herrenknecht.The first TBM will be assembled in Warsaw in april 2011. The second and third TBM will start from S11 Powisle station. The most difficult part is drilling the tunnels under Vistula River and construction of S10 d S11 stations. First – is the deepest station (39 m of D.W.) on the line, second one is located under the existing road tunnel. In Warsaw, tunnels and 30 m deep excavations are built in Tertiary and Quaternary deposits – soft to very stiff soils. The geological conditions along the line ad the location of stations are shown at fig. 1.

The station will be constructed using diaphragm walls (20 m to 40 m deep and 1,0 m to 1,50 thick) and jet grouting bottom plague. The main contractor is the joint-venture made of Astaldi (Italy) acting as the Leader, Gulermak (Turkey), and Przedsiębiorstwo Budowy Dróg i Mostów (Poland). The price is approx. 1 billion EUR ; end of works - 27th October 2013.

A design for the construction of a tunnel under the river Vistula in Warsaw has been finished. The tunnel will be used to transport wastewater from the left-bank part of the city to the currently modernized wastewater treatment plant situated on the right river bank. The 5.35 m diameter TBM is already completed (fig. 2).

The starting shaft, about 30 m deep, made with use of diaphragm walls is located at the right bank of Vistula. The tunnel with internal diameter of approximately 4.5 m contains two delivery pipelines with diameter of approx. 1.6 m. The length of the tunnels between the shafts is approx. 1350 m.

The road tunnel in the locality of Laliki on the S69 road in southern Poland is completed and already in operation. The tunnel was built in the geological formation called Carpathian flysch, using blast and bored method (Fig.3). 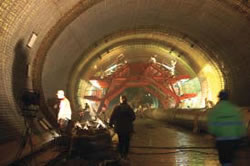 The total length of the tunnel is 678 m and the structure is composed of the main tunnel containing a two-line roadway and one smaller evacuation tunnel situated at the distance of approximately 30 m from the road tunnel and connected with it by 4 passages.

The tender design phase has been completed for the road tunnel under the Martwa Wisła river in Gdańsk. The TBM method was accepted. Two independent 950 m long tunnels will be built with internal diameter of 13.50 m, containing two-lane roadways with a 3.5 m wide emergency lane. The total length of the passage will be 1970 m including the sections to be built using the cut and cover method – 680 m as well as open approach ramps with length of 340 m.