connection line between Warsaw Central Station and Airport Terminal 2 was opened in May 2012. The tunnel was constructed using cut & cover method and diaphragm walls. The price was 209 mln PLN (50 million EURO).

The construction of 6.3 km long central part of underground line in Warsaw 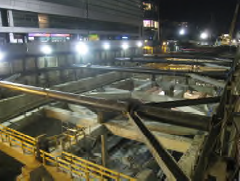 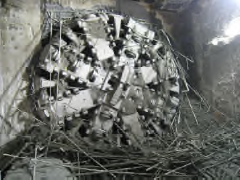 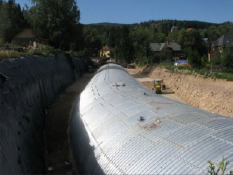 is under progress. The total length of the passage will be 1970 m including the sections to be built using cut and cover method – 680 m, as well as open approach ramps with length of 340 m. Two independent 1076 m long tunnels containing two-lane roadways with a 3.5 m wide emergency lane will be built using 12,56 diameter Mixshield TBM. The TBM named Damroka (Fig. 3) is now being assembled in the starting shaft (Fig. 3) and it is scheduled to begin drilling in May 2013. End of works – December 2014.

The concept design of train tunnels in Łódź connecting stations Łódź Fabryczna and Łódź Kaliska has been completed. The construction of 2 tunnels under the city center of Łódź is planned – High Speed Railway tunnel and extension of line 17 from Łódź Fabryczna. Tunnels will be constructed using 12,7 m diameter TBM as well as cut and cover method (diaphragm wall technology). Completion of work is initially scheduled for 2015/2016.

being a part of Karpacz bypass was finished in December 2012. The tunnel is passing under skiing and sledge slope named Kolorowa. The price was 14 mln PLN (4,5 mln USD), technology – cut & cover (Fig. 4).