Tel: +44 7808 765923
E-mail: This email address is being protected from spambots. You need JavaScript enabled to view it.
Web: www.normet.com

The Normet team that has developed that company’s sprayed concrete (wet shotcrete) for mining, will be inducted in the underground support category at the gala dinner in the Brown Palace Hotel, Denver on February 16th 2015 www.normet.fi

Normet was founded in 1962, turning 50 in 2012.  In March 2014, it produced its 10,000th machine and has been very well known as a leader in sprayed concrete machines and transporters which have over the last 20+ years, from a technology perspective, changed the way mines looked at ground support, primarily during development but also for production.

Sprayed concrete is now often the first ground support that a new mine will look at.  Its effectiveness as a rapidly applied, active and durable means of areal support has changed the way that mines develop their operations.  Its safety in application, whereby the operator was kept away from unsupported ground, and its ability to develop strength rapidly, make it a key component of a rapid development scheme.  The efforts of the individuals mentioned, and the support of many others, have been instrumental in moving the science of sprayed concrete forward in mining.  Concrete mix design, super plasticisers, hydration control agents, alkali free acelerators, are all part of a successful sprayed concrete program.

When it comes to the business end of the process, the application, Normet Line machines have led the way with their robust carrying capacity, versatile boom technology, precise accelerator dosing systems and built-for-purpose shotcrete pumps.

Normet inducted into the International Mining Technology Hall of Fame for wet shotcrete.

2012-02-09: Normet receives the Internationalization Award of the President of the Republic of Finland

The President of Finland, Tarja Halonen, has presented the 2011 Internationalization Award to Normet. The Internationalization Award of the President of the Republic was presented to this year’s winners today in Helsinki. The award is a recognition given to an internationally successful Finnish company or community. This year the award was granted to Normet Group Oy in the growth company category, Beneq Oy in the newcomer category and a Finnish game cluster in the community category.
PDF (Initiates file downloadread more)

Normet produces solutions for demanding customer processes in underground mining and tunnelling.
Besides the equipment and vehicles for mining and underground construction Normet offers Life Time Care services for the maintenance and usage processes for the entire life time of the products.

In April 2010 Normet acquired 40% of TAM International ( a rapidly expanding construction chemicals manufacturer and distributor) and formed a global partnership with TAM to create a broader offering around the tunnelling process.
This partnership will enable both Normet and TAM to help their customers to achieve improved quality and more cost effective results in their underground construction process especially in sprayed concrete application, rock support, waterproofing, injection and repair of structures.

Normet is presenting TAM products in areas where TAM is not yet active and, in return TAM is acting as agent and distributor to Normet equipment and services in the UK, Hong Kong, Taiwan and ASEAN.
Normet and TAM together have now 31 locations in 20 countries worldwide to support customers in their underground construction projects.

In 2010 Normet also strenghtened its tunnelling equipment offering by introducing at Bauma 2010 in Munich the Spraymec 8100 VC, the most advanced model for concrete spraying in its Spraymec series. 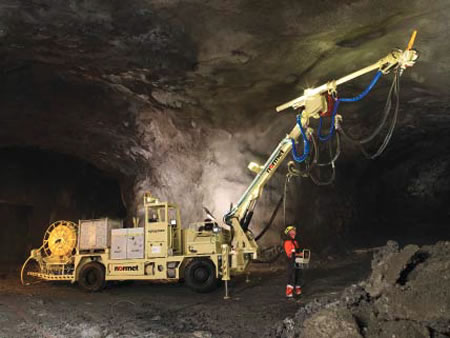 In 2011 Normet will together with TAM further develop its presence, offering and support to help their tunnelling customers where ever in the world.