E-mail: This email address is being protected from spambots. You need JavaScript enabled to view it.
Web: www.therobbinscompany.com/en/

Your Partner in Tunnelling

With more than 65 years of innovation and experience, The Robbins Company is the world’s foremost developer and manufacturer of advanced, underground construction machinery. Over the years, our name has become synonymous with the finest crafted machines in tunneling. Each piece of equipment, from our TBMs to our cutters to our SBUs and everything in between, is engineered for maximum durability and premium performance, ensuring the successful completion of even the most difficult underground construction projects. Robbins is a total supply company, offering everything from cutters and conveyors to knowledgeable personnel and technical support.

Build it Right, Build it Once 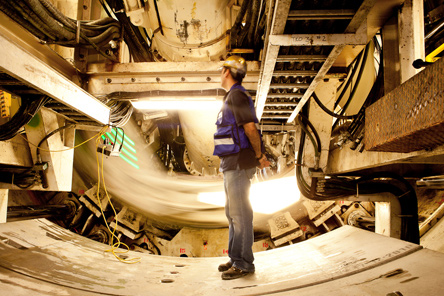 The days of designing TBMs with pen and paper are long gone, so isn’t it time TBM manufacturers stopped assembling them the old-fashioned way? Robbins thinks so. That’s why we created Onsite First Time Assembly (OFTA), a revolutionary process that’s changing the face of the tunneling industry. Robbins’ time-saving Onsite First Time Assembly (OFTA) method was first used at Canada’s Niagara Tunnel Project in 2006 and has since been used on over 25 projects worldwide with a range of Hard Rock, EPB, and Crossover machines. OFTA helps our customers shed months off their project timelines and millions of US dollars off their budgets, all by initially assembling the TBM at the jobsite rather than in a manufacturing facility.
There are other advantages to OFTA as well. Site personnel involved with the OFTA process typically receive greater training due to the additional hours spent during machine assembly and testing. Contractors who opt for OFTA deliveries are often able to take over full operation and maintenance of their new TBM much faster than contractors who opt for a traditional delivery. 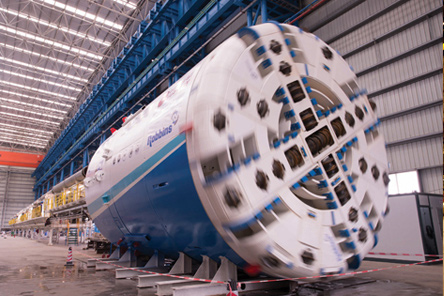 Today’s tunnel boring machines must adapt to shifting conditions, and Robbins Crossover TBMs do just that by combining the most powerful features from different machines. Whether the geology of your project includes sections of hard rock, soft ground, boulders, or a little bit of everything, Robbins has a solution for you. For the most difficult projects, Robbins Crossover TBMs can offer time-saving and efficient tunneling. Whether the hybrid design converts between EPB and hard rock modes, between Slurry and hard rock, or between EPB and Slurry is up to you.
Depending on the type of Crossover TBM, muck removal from the machine face can be easily switched to support different ground conditions. EPB screw conveyors can be strengthened with abrasion resistant, replaceable sections for rock, and belt conveyors can be used if hard rock conditions are encountered. For an XSE TBM—a cross between Slurry and EPB—both slurry piping and an EPB-style screw conveyor can be installed on the machine.
The Robbins Company has Crossover TBMs excavating worldwide. In fact, an 8.7 meter (28.5 ft.) diameter Robbins Crossover (XRE) TBM—a cross between a rock TBM and an EPB—recently set a national record by excavating a whopping 702 meters (2,304 ft.) in one month at Mexico City’s Túnel Emisor Poniente (TEP) II Project. Once complete, the 5.8 kilometer (3.6 mi) tunnel will supplement an existing and overtaxed wastewater line built in the 1970s. The deep drainage tunnel will serve to prevent recurrent flooding in Valle Dorado, and will benefit the cities of Cuautital Izcalli, Tlalnepantla, and Atizapan de Zaragoza, an area with a total population of 2.1 million inhabitants.
Adaptable, dependable, and efficient, Robbins Crossover TBMs are built to endure multiple tunnel projects over many years. Click here to learn more.
Crossover Link: http://www.therobbinscompany.com/en/our-products/tunnel-boring-machines/robbins-crossover-machine/
Video Link: www.youtube.com/watch?v=hBOLSjQHhro