E-mail: This email address is being protected from spambots. You need JavaScript enabled to view it.
Web: www.cowi.com

COWI is an international consultant company with 6000 employees working within Engineering, Economics and Environment. We work with a full range of engineering services within selected regions. Globally we work within selected services of which tunnels and underground structures is one.

Within the tunnels and underground structures the positive trends we have achieved in recent years have continued. 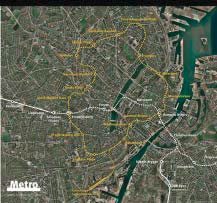 We have prepared the conceptual design and tender documents for the new Copenhagen Circle line, which consists of 16 kilometres of bored tunnels, 17 underground stations and four shafts. At the start of 2011 a contract to construct the project was signed with a consortium of Italian contractors. COWI will assist the Client Metroselskabet I/S in implementing the project.

Tunnels inaugurated in 2010 in Korea, Ireland and Sweden.

During 2010 we saw three of our major tunnelling job going from construction into operation. In October 2010 the Busan-Geoje immersed road tunnel opened for traffic. COWI has been involved since 2004 performing the detailed design as well as construction site technical services to the BOT contractor Dawoo Construction. In December 2010 we participated in the opening of the railway Citytunnel and three underground stations under the city of Malmø, when it was inaugurated by the King of Sweden. COWI have in the period 1999 to 2010 being the consultant to the owner Citytunneln preparing conceptual design, contract documents and design follow up during construction. Our work in Ireland on the Limerick tunnel was successfully completed with the celebration of the opening of the immersed road tunnel in July 2010. We have being assisting the owner National Road Authorities (NRA) with the implementation of the BOT project during the period from feasibility studies in 2002 until completion of the project in 2010.

In Stockholm, Sweden, we have completed the detailed design of the Söderström railway tunnel for Züblin-Pihl JV. Construction work is in full swing, and the three immersed tunnel elements are being pre-cast within the steel lining and made ready to be submerged. We have also taking the design for the Marieholm tunnel in Gothenburg, Sweden to a level where it is ready for tendering for a contractor. Our Client is the Swedish Traffic Administration and the tunnel is an immersed road tunnel under the river Göta.

In China we have completed the preliminary design and have progressed into the detailed design phase for the Hong Kong-Macao-Zuhai link working for the Chinese contractor CCCC. The project includes a six-kilometre immersed tunnel for road traffic. In Abu Dhabi we are well advanced with the detailed design for the STEP sewerage project phase 2 and have also won the detailed design for the phase 3 of the project. We are working as consultants for the Italian contractor Impregnilo. In Russia we have recently been assigned a contract to review the design of the Orlowski tunnel in St. Petersburg, taking the road traffic under the river Neva in a bored tunnel to be constructed using a world record TBM of 17 m diameter.