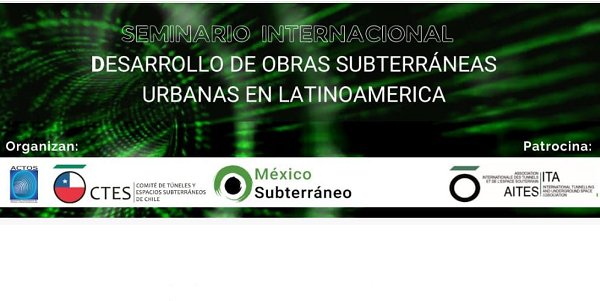 Participation in an international seminar with the Chilean, Colombian and Mexican Tunnelling associations

ITACUS - the ITA Committee on Underground Space was pleased to participate in this important seminar highlighting the potential and current uses of underground spaces in Colombia, Chile and Mexico!

Han Admiraal gave a short address by video message highlighting the importance of the awareness and knowledge about the subsurface. Antonia Cornaro talked about the work of #itacus in the field of promoting underground spaces as an integral part of the cities of the future. She stressed that they should not be used as an urban service layer but incorporated in multi-functional and publicly accessible developments.

Such an example was shown by Luis Eduardo Camona de Territoria of an urban underground market place - connected to the metro system - currently being built in Santiago.
Other examples shown were the reviews of a former salt mine in Columbia and the capacity constraints and extension of the metro system in Mexico City by FERMIN ANTONIO SANCHEZ REYES .